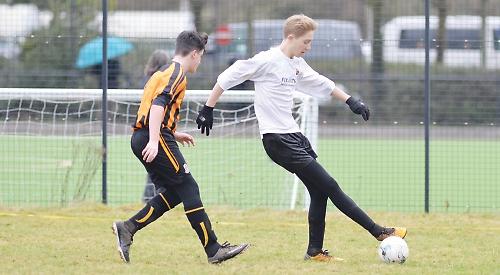 The visitors kicked off the year with a thrilling 5-4 victory in a closely contested match with a committed, spirited and quality display from the whole team.

Henley went on the attack from the whistle with Jake Jones, Pawel Kaczorowski, Christian Oswald and Sam Clark linking up well with a series of fast and flowing runs down both channels. It was the high work rate and distribution from midfield and defence, and numerous dribbling and probing runs from Gabriel Langford and Ben Stodolnic, that helped contribute to Henley’s attacks.

Despite Henley enjoying more of the play and goal scoring chances, it was Liphook that took the lead in the 20th minute when the defence of Ed Lawrence, Ethan Pearce, Victor Sanchez and Hilary Lunn came unstuck.

Henley struck back in the 25th minute with a free kick from Jones to equalise. Jones also had a part in Henley’s second goal, with an assist for Oswald who put Henley in front with a shot drilled into the corner of the goal from outside the box. Liphook came back fighting in the second half, determined to take control of the match. The Henley defence was strong and resolute with several good saves from Sam Butler, all helping to keep Henley in the match.

It was Liphook’s number 10, who was a continual menace throughout the match, that levelled the match for the home side in the 57th minute. The momentum swung back in Henley’s favour with when Sam Clarke, whose powerful, dipping, swerving shot from outside the box, saw the visitors take the lead again.

Henley’s fourth came minutes later, with a lobbed pass from Jones over the defence to Oswald who coolly slotted the ball past the keeper.

A penalty decision against Sanchez saw the hosts pull a goal back from the spot after 67 minutes. Soon after Liphook scored their fourth of the match to level the scores.

In the final minute of the game, Pearce bundled the ball over the line to secure the points for the Hurricanes.

Henley’s play in the final third of the pitch started promisingly, with good link up play from Felix Grant, Archie Barker and Sonny Martin. However, Hurricanes’ finishing let them down with several chances blasted over the bar.

This all changed with the introduction of Phil Hayes who immediately got on the scoresheet with a well-taken finish over the Hook keeper.

Henley looked secure at the back with stand-in goalkeeper Liam Hilditch marshalling his defence well and Jem McAllister playing with composure and style. The goal spurred the Hurricanes on with Martin’s pace causing problems for the Blues defence. Martin’s performance was rewarded when he showed composure to knock the ball past the Hook keeper, finishing from a tight angle from the righthand side of the box to put Hurricanes 2-0 up

Henley then started to take control with man-of-the-match Grant increasingly instrumental and scoring the goal of the game, chipping the goalkeeper from distance before adding a second. Ben Hudson had a headed goal disallowed from a corner before Martin added to the haul with his second of the game.

The hosts got off to a good start and took an early lead from the first corner of the match. Abhishek Thapa put in the corner that found Will Saunders whose initial shot was palmed away by the visiting goalkeeper only to find the foot of Leo Browne who calmly slotted home.

Henley, in attacking form, were unable to convert again from the numerous corners won while a long range shot from Browne just went wide of the target.

Sam Morgan, playing in central defence in place of the regular misssing defender, put in a good display for the Hotspurs as he made several good runs.

Just before half-time Curley Park equalised and began the second half in all out attack.

Curley Park had a quick centre forward who caused numerous problems for the Hotspurs in the second half as the visitors’ constant pressure resulted in seven goals being scored.

Henley pulled a goal back through Thapa to make it 8-2 in a game that saw left back Michael Croft named the home side’s man-of-the-match.

On a wet morning, the first quarter saw both teams struggling to get a foothold in the game as it remained goalless.

In the second quarter the Hurricanes opened the scoring. Sam Winters picked up the ball straight from a Bracknell goal kick and their defenders were unable to stop him as he sprinted into the opposition box before smashing the ball low past the keeper. Olly Saunders was keeping things tight at the back as his reading of the game kept the visitors at bay.

At 1-0 Ben Horner in the Hurricanes goal had to be at his best to keep out the visitors as he pulled off a stunning reflex save to preserve the home side’s lead going into half-time.

Man-of-the-match Joe Turner increased the Hurricanes’ lead as a clever through ball from Tom Yeoman sent him away. Turner beat one man and then finished with great aplomb at the near post to make it 2-0.

Turner then turned provider as he played in Henry Steele. Steele ran on to the through ball and calmly slotted the ball past the advancing keeper to make it 3-0.

Winters added another at the start of the last quarter after an exquisite pass from Tom Atkinson, who had been a constant threat down the right. Winters then completed his hat-trick with a poacher’s effort following a goal mouth scramble.

Alec Steele came to life in the last quarter as his penetrating support play from deep set up numerous attacks for the hosts. One of these moves led to a corner from which captain and hard-working Nicolai Bruun-Andersen completed the scoring.