Hurricanes side blown away by Hurst 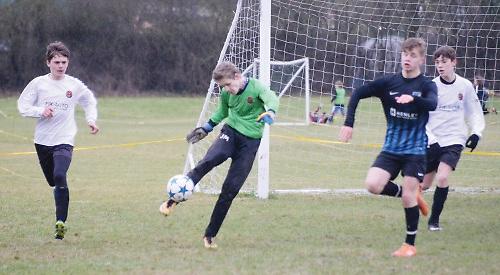 AFC HENLEY HURRICANES U15s were outgunned last Saturday by a strong HURST U15s side in the East Berks League, losing 6-2 at Jubilee Park.

Hurst came at the hosts from the start, showing more urgency and testing stand-in keeper Jem McAllister straight away. However it was Henley who broke the deadlock, counter attacking at pace with Archie Barker slotting the ball home.

Hurst responded and continued to push at the Henley back line of Owen Simmons, Felix Butterworth, Liam Hilditch and Phil Hayes. Eventually the pressure told with Hurst grabbing a couple of goals to lead 2-1 at half-time.

Henley responded well at the start of the second half with Lucas Pestana battling well in the middle of the park and introducing some rhythm into the Henley attack. The front line of Archie Barker, Ben Hudson, Felix Grant and Martin all created several good chances to level with the away side pinned back in their own half for sustained periods.

The game turned on a key moment. After Henley hit the post with another strong attack, Hurst countered at pace and scored with an impressive finish. The game then swung into Hurst’s favour. With the Hurricanes now chasing the game, Hurst exploited the space created and scored a further three goals to take the game out of reach. Henley scored a late consolation goal with Hayes tapping in at the far post.