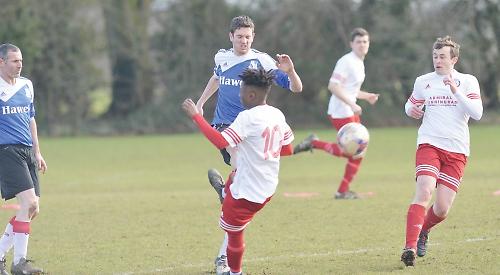 THE large crowd that gathered at Cintra Park expecting a footballing classic between the Premier Division’s top two sides were in for a disappointment because defences dominated and the difficult surface made a passing game almost impossible.

However, the match was still an intriguing battle that saw league leaders WOODCOTE/STOKE ROW run out 2-1 winners against host side WRIGHT AND UNITY SPORTS.

In the first half the two sides cancelled each other out almost entirely and there was little goalmouth action.

The game did spring to life in the second half and inside a minute it was 1-0 to the home side after Woodcote gave the ball away and then watched on as the home side had the simple task of converting at the near post.

Woodcote found it difficult to get going but Unity seemed content to sit back and defend their narrow lead.

After the hour mark Woodcote stepped up a gear and Mike Davies was unlucky not to score on 65 minutes when his shot from Jake Dillon’s pass cannoned off the post into the arms of the home keeper.

The decision by coach Ross Weatherstone to make changes soon bore fruit as Ryan Corbett had only just come on when he received a cross from Frank Dillon and kept his cool to slot home for 1-1 on 68 minutes.

Unity almost took the lead from the kick-off but Sonny Wheeler made a smart save. This was to be the last meaningful attack by the home side and, with James Worsfold on the pitch as a substitute, his abilities as a target man began to give Woodcote the initiative. On 81 minutes the beleaguered Unity defence cracked and from Frank Dillon’s pinpoint corner, Sam Green scored with a well-struck volley.

Even then there was no out-and-out onslaught from the home side and Woodcote held on relatively comfortably for the final 10 minutes thanks to the composure of their defenders Mike Butcher, Sam Green, Jake Tucker and Liam Baker.

ROTHERFIELD UNITED slipped back into the Division 1 relegation zone after going down 2-0 at WESTWOOD UNITED RESERVES.

WOODCOTE/STOKE ROW RESERVES had a morale-boosting 4-1 home win against Division 2 third-placed AFC CORINTHIANS in a match that saw Darren Russell score a second-half hat-trick against his former team. Tom Brownlow was on-target from the penalty spot for the hosts’ other goal of the match.

The hosts, fielding a strong side that included Ram Kumar and Henry Arthur, piled on early pressure in an end-to-end first half that saw the visitors test Lucas Jinks in the Henley goal.

The hosts went close to taking the lead when Arron Finch crossed the ball to Nick Holzer who fired wide with only the goalkeeper to beat. Moments later a Dan York cross found Kumar whose shot was well-saved by the visiting keeper.

Highmoor/Ibis Athletic started brightly in the second half and put Henley under pressure early on.

On 65 minutes the hosts took the lead when a corner was partially cleared and the ball fell to Arthur on the edge of the area who fired home his first goal of the season.

The visitors upped the pressure in search of an equaliser and won a penalty after a challenge by Arthur in the area was deemed a penalty by the referee. However, the resulting spot kick was well saved by Jinks with both hands to his right.

Henley went close to adding a second of the match when Aiden Rushton was put through with just the goalkeeper to beat but the referee pulled play back for offside.

Elsewhere in the division WARGRAVE moved up to fifth place after beating BRAYBROOKE 3-1 at the Recreation Ground. The first-half was an even affair with few chances being created. Braybrooke’s best chance was a 30-yard shot which hit the crossbar before Callum Alliston latched on to a goalkeeping mistake to put Wargrave 1-0 up.

Wargrave could have extended their lead before half-time as they forced a good save from the keeper before hitting the post.

Braybrooke equalised from the penalty spot early in the second half. Wargrave hit back as James Pople made it 2-1 from a penalty of their own.

Later in the half Wargrave were awarded a second penalty — the third of the match — which Pople scored tucked away to make it 3-1. Braybrooke pressured for the last 15 minutes but failed to make many clear chances.