It's snow go as big freeze sets in 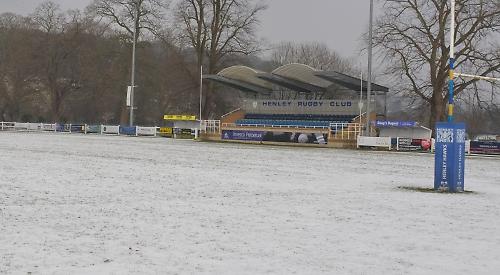 HENLEY and the surrounding area’s sporting fixtures were decimated last weekend by the freezing temperatures and snow brought in by Storm Emma.

Henley Rugby Club called off all its fixtures on Friday of last week with the Dry Leas pitch covered in snow. This included the Hawks’ home National Division 2 South clash with Taunton Titans and the Bulls home game with Shelford 2nds.

All the club’s mini and junior training sessions on Sunday morning were also cancelled as was the Hawks Women’s home match with Bath the same day.

In a statement Henley Rugby Club said: “We apologise for any inconvenience caused, but as you can appreciate, player and spectator welfare is absolutely paramount in making this decision.”

Only one rugby match in Division 2 South survived the weather and that was up the road in Sonning where Redingensians defeated Wimbledon in a match that went ahead after supporters helped clear the pitch earlier in the morning. Abbey Rugby Club’s derby South West League Wadworth 6X Southern Counties North match against local rivals Reading at Rose Hill was also postponed.

In football all the Thames Valley Premier League fixtures were cancelled as were all the games in the Wycombe and District League, North Berks League and Reading and District Sunday League.

Henley Town’s Sunday side are now facing fixture congestion as they have played just 10 Division 3 matches in their 26 game season. Henley are also still involved in the Industrial Cup where they will travel to Tilehurst Club Reserves this weekend following Sunday’s postponement.

AFC Henley had all their fixtures called off on Thursday after the East Berks League Football Alliance cancelled its entire Saturday programme of fixtures.

The extreme adverse weather also proved too much for Henley Hockey Club’s all-weather Jubilee Park pitch as the amber and blues had to call off all its games due to the freezing conditions and snow and ice.