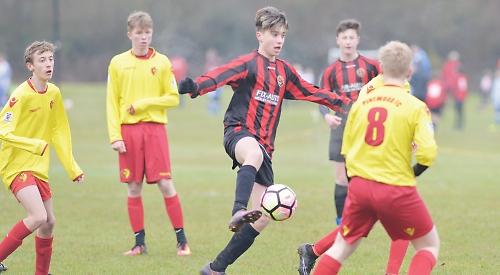 With several players out through injury coach Matt Jones lined up the team with a number of players in different positions: notably Ethan Pearce on the left wing, Hilary Lunn in midfield, and Sam Alexander and Victor Sanchez back in defence, alongside Seemit Gurung and captain Ed Lawrence.

The first 20 minutes were evenly contested with Henley’s slick passing play, creative spark in midfield, and trademark surging runs down the channels contrasting with the opposition tactics of playing long balls up the pitch to their towering attacking players.

Gabriel Langford saw an early effort tipped over the bar but, against the run of play, it was a long ball that caught out the Henley defence in the 24th minute, when Reeves Rangers converted with a shot lofted over Sam Butler for the opening goal. Henley struck back four minutes later when man-of-the-match Pearce’s pass straight down the left was chased into the corner by Jake Jones, who whipped the ball into the 18-yard box, to be fired home by Pawel Kaczorowski.

The visitors’ second goal came from another perfectly weighted ball by Pearce down the left flank, which was collected by Jones, skilfully timing his run, and then launching the ball past the keeper into the top corner of the net. Henley’s third goal came in the 43rd minute from a set piece Jones’s free kick found Kaczorowski who scored with a header and his second of the match. The fourth followed minutes later when a powerful shot from Christian Oswald was well saved by the Reeves Rangers keeper, only to find the feet of Jones who added his second of the game.

The home side, dangerous throughout the game, scored the last goal of the game with the final kick of the match.