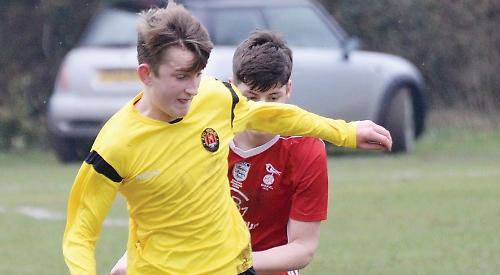 HENLEY HURRICANES U16 made it 10 wins in a row with a 2-0 victory at home to BRACKNELL TOWN FC YOUTH on Saturday.

But while the game had its beautiful moments, it will be remembered by many for the red card given out to a Bracknell player in the second half.

In the face of a remarkably ill-disciplined display from the visitors, Henley demonstrated to their coaches and supporters a growing maturity, strength of character and gritty team spirit.

Henley were expecting a tough game having narrowly won their away fixture earlier in the season by a goal to nil.

The first 20 minutes was closely contested, with Bracknell pressing hard and denying Henley the space to create many goal-scoring chances.

Not intimidated by the aggressive tactics of the Bracknell attack, Henley’s defensive line of Hilary Lunn, Seemit Gurung, Alec Strickson and captain Ed Lawrence were resolute and determined to play out from the back in searching for runs from the midfield.

Gabriel Langford and Pawel Kaczorowski both fired shots over the bar and wide of the posts before their side’s first real clear-cut opportunity to take the lead.

In the 15th minute, a pass from Jake Jones allowed Christian Oswald a clear run on goal but he was brought down by a Bracknell defender just outside the penalty area. Jake’s stepped up to take the free kick and only narrowly missed the left-hand post.

Bracknell were stubborn and well organised in defence during this period and it took a pass of real quality from midfielder Ben Stodolnic to split the defence to give Jones the space to drive the ball powerfully past the Bracknell keeper for the opening goal in the 22nd minute.

With Sam Alexander on for Christian, the second half was again evenly matched with Bracknell launching several attacks from outside the box. Goalkeeper Sam Butler kept his side in front after pulling off a series of fine saves with one in particular having him at full-stretch.

Henley’s second goal came courtesy of Ethan Pearce from within the box, assisted by Jones after a neat flick from Winters.

Then, following the sending-off in the 65th minute, Pearce almost got his second but the Bracknell goalkeeper did well to get down low to push the ball clear of the net to ensure the score remained unchanged.

Alec Strickson was named Henley’s man-of-the-match for his performance as part of a four-man defence.

Meanwhile, the HENLEY HURRICANES U11 side proved their doubters wrong as they drew 2-2 away at a strong HAWLEY RAIDERS side.

The relegation-threatened Hurricanes have had a difficult season but found their form here and were unlucky not to secure all three points. The game began in open fashion with chances for both sides but it was the hosts who scored first with a thunderbolt of an effort from 30 yards that keeper Ben Horner could do nothing about.

In response the Hurricanes rallied and created plenty of chances of their own but they could not convert any until Sam Winters was sent tearing away through the heart of the Raiders defence. His powerful shot could only be parried by the opposition keeper and Tom Yeoman was on hand to ram the ball home to make it 1-1.

However, their joy was only short-lived as the Raiders hit back with another long-range effort to make it 2-1 at half-time, which again Horner could do nothing about.

Captain Luca Thomson had one of his best games for Henley as Bracknell found it difficult to get past him and was ably assisted by the energetic Tom Bonser, who tackled tenaciously throughout the game, and Olly Saunders whose thumping deliveries from the back help setup attack after attack.

Joe Turner, in his midfield anchor role, was also effective in snuffing out any Raiders attack and protecting the back three.

Henley equalised in the third quarter when Winters sent Tom Atkinson away down the right. Atkinson, who had been a constant threat on the wing, returned the favour and played Winters in to get a shot away. His shot was saved but, just like their first goal, Yeoman was there to slot home the rebound for his second of the game.

This sparked a frantic finale to the game as Daniel Tsoi, operating down the left, set up numerous attacks for the Hurricanes but they were again unable to take their chances and the hosts were relieved to hear the final whistle as the game finished all-square.