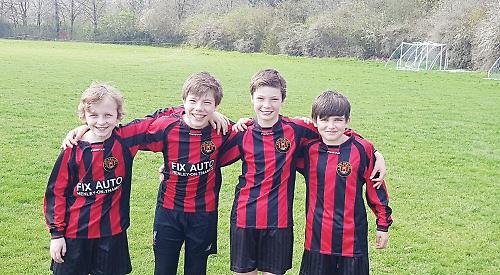 THE U11 AFC Henley Hurricanes put in a heroic performance at Jubilee Park on Saturday to ensure their relegation battle would go down to the wire.

They got off to a flying start when Alec Steel rampaged down the right, beating two defenders, and crossed the ball for striker Finnbar Scott who made no mistake from close range.

Henley’s goalkeeper Olly Saunders made several fine saves to keep his side in front while midfielder Henry Steel broke forward when he could.

The visitors were the next to score, bagging the equaliser with a header direct from a corner. Indeed, set pieces proved to be their most likely method of scoring as captain Luca Thomson snuffed out NPL’s main attacking threat in open play.

Daniel Tsoi, who would later pick up the man-of-the-match award, did well to exploit the space in behind NPL with his passing while his tackling back kept the opposition at bay.

Joe Turner then sent Tom Yeoman streaking away down the middle and he rammed the ball home after an error from the opposition keeper to make it 2-1 at half-time.

After the re-start NPL made it 2-2 direct from a free kick but the hosts bounced back again when Tom Atkinson threaded the ball through to Scott who made it 3-2.

Henley was then awarded a penalty when Yeoman was brought down in the box and he stroked the ball home himself to make it 4-2.

NPL grabbed a final consolation goal, again direct from a free kick, but Henley held on for their second win of the season.