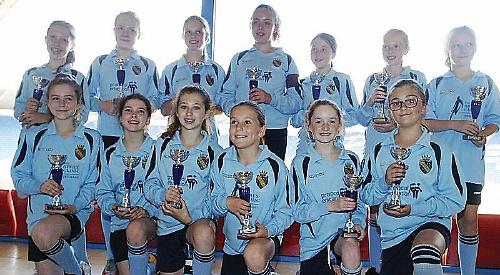 THE naming of football clubs can be a tricky business. Many dangers are to be avoided to avoid ridicule and perhaps even offence.

But get it right and a name can have considerable positive effects — loyalty, confidence, belonging, identity and more.

Our club, like most others, takes its name from its home and this alone has benefits.

Experts have long debated the significance and positive effect that a name has on the behaviour of players and their supporters — how the opportunity to play with and belong to a group of like-minded people has a powerful influence on individual and group behaviour, physical health and mental wellbeing and why taking part together (and winning as well as losing) as a team is such great fun and so good for you.

In the professional game, there are many famous names which are instantly recognisable and, for some, their mere mention strikes feelings of pride and loathing in equal measure, for example, Arsenal (the Gunners), Portsmouth (Pompey), Southampton (the Saints) and in Manchester, City or United.

Often the rivalry of these teams and their followers is based on the location of the club. The name is the banner under which they unite, find strength and purpose and, above all, live out their passion for the beautiful game. But often the names and nicknames of teams have other significant meaning. Some are associated with old industries, such as the Toffees (Everton). The Wednesday in Sheffield Wednesday comes from the club’s origins as a cricket club whose games were always played on, yes, you guessed it…

In the women’s game, there has been debate about the use of the word “ladies” as opposed to “women’s”.

For example, Professor Kath Woodward, an Open University sociologist, says: “The use of the word ‘ladies’ suggests physical frailty and need for protection.”

But Jordan Butler, who plays for Millwall Lionesses, says: “I wouldn’t feel discriminated against by being in a ‘ladies’ team. Even if I was starting a team from scratch I’d want our gender in the name.” (Owen Adams, BBC).

It’s the naming of individual teams in the amateur game which has given rise to the need for greater ingenuity, not least due to the explosion in the number of players, especially in the women’s game.

Wargrave has the enviable problem of having to distinguish between teams because of its burgeoning numbers of players, now more than 300.

Though the traditional way of describing the age group of the teams helps, arguably that misses the benefit a catchy name can deliver.

It also doesn’t solve the problem of having more than one team in the same age group.

At Wargrave, we have joined those clubs which choose animal-related names for some of their teams, such as lions, leopards, sharks, dolphins and tigers.

But do such names serve deeper purposes? Does using the names of predators strike fear in our opponents? Of course not, it’s all just good fun.

However, the use of such names might just help foster togetherness, loyalty, friendship and trust between players.

It’s another small way to create the environment in which our players learn, grow in confidence and, above all, have fun together.

I suspect, however, that the truth is the name isn’t so important after all. It’s the players, the sport, the joys and the highs and lows of a team that count.

As a coach with a daughter who plays for Wargrave, I am proud to be associated with a growing sport in which women and girls rightfully get the recognition and respect they deserve.

It’s only right that their part of the sport is gaining greater parity and equality with the men’s game.

• Do you or your daughter have an inner leopard, lion or tiger waiting to roar out? If so, come and join the rest of the pride here at Wargrave Girls’ & Ladies’ FC, an FA Standard chartered club which follows the FA Respect programme.