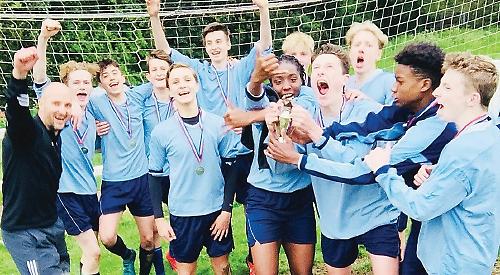 Having failed to beat Wallingford in their previous five years of rivalry, the Gillotts team saved the best till last in their final outing for the school in the Vale of White Horse district schools cup final.

In the match hosted at Henley Town’s Triangle Ground, Wallingford used their physical presence to force a scrappy game in the first half, taking a one-goal lead into half-time when their forward was put directly through on goal with a long pass that was lobbed over the on-rushing Josh Le Beigge in the Gillotts goal.

As the second half progressed, the better technical ability and possession football of the Gillotts team began to see the momentum of the match swing in their favour.

Gabriel Langford and man-of-the-match Marco de Sousa in the centre of midfield were undeterred by the continual fouling from the opposition that resulted in Wallingford collecting a number of yellow cards and conceding free kicks in dangerous positions. One of these was struck by Tumelo Makobe from the corner of the area, leaving the Wallingford keeper with the crossbar to thank for keeping them ahead in the tie.

The match then turned into an end-to-end cup tie, Sam Butler now in the Gillotts goal having to make a number of key stops to keep the score at 1-0.

Gillotts were creating the better of the chances and finally got their just reward when Kyra Hannibal met another quality cross from Pawel Kaczorowski to fire home and take the tie into extra time.

In extra time the critical turning point came in the first-half when Jake Jones was put through one-on-one and calmly slotted the ball underneath the Wallingford keeper to put Gillotts ahead.

The Gillott’s defence of Ed Lawrence, Ethan Pearce, Christian Oswald and Seemit Gurung/Sam Clark were authoritative in repelling anything Wallingford had to offer and able to play out from the back to support the running of Max Gaskin on the left flank.

The killer blow came in the final minute from a Wallingford corner. With their entire team, including the keeper, up in the area for a last ditch attempt to salvage a draw, Gillotts were able to clear the ball away to Charlie Douglas to run the length of the field unopposed and put the tie to bed.