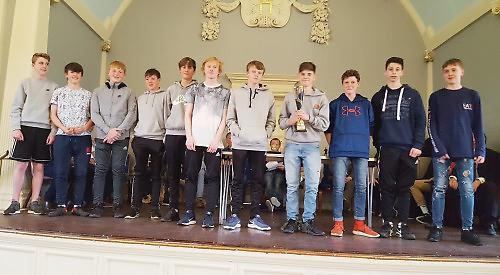 THE AFC Henley Hurricanes U14s side picked up the most successful team award at the club’s end of season awards evening held at Henley town hall on Wednesday evening of last week.

The Hurricanes U14s side had a triumphant campaign in which they won the East Berks League division as champions as well as winning their cup competition.

Club chairman Trevor Howell welcomed players and guests to the evening for the U9s to U15s age groups in which he outlined future plans for the club including the design of a new clubhouse, changing rooms and 70 parking spaces on Jubilee Park to replace the existing facilities over the road. It is hoped work could start before the end of the year with completion in March 2020.

Howell, who also thanked various committee members and helpers at the club and went on to explain the club’s connections with other organisations.

After talking about the clubs finances and various resignations on the committee Howell handed the microphone over to Mike Turner who compered for the remainder of the evening as the awards were handed out.

The club person of the year award was presented to both Jon Francis and Phil Finch for their exceptional commitment to their respective teams.

Tom Yeoman picked up the top goalscorer award for the nine-a-side game having netted 20 for the U11 Hurricanes while Aedan Griggs scooped the seven-a-side category having scored 36 goals for the U9 Hotspurs.

Club secretary Matt Jones and president John Hooper made a short introduction to the players and parents outlining how the clubs intend to come closer together in the future, to create a football pathway for youth players into adult football and creating a community club for all players.

Next season AFC Henley will be inviting the outgoing U18s to sign up for a newly formed team at Henley Town for next season which will be coached alongside the U18s at AFC Henley by Andy McIntosh (UEFA A-license) and Sam Bell (FA Level 2).

Jake Jones also picked up the top scorer award for the U16 to U18 age group after netting 23 goals.

The club recognition award was presented to Iain Priestley, manager of the U18 Kites.