Searle’s goal from outside box sets up opening day win 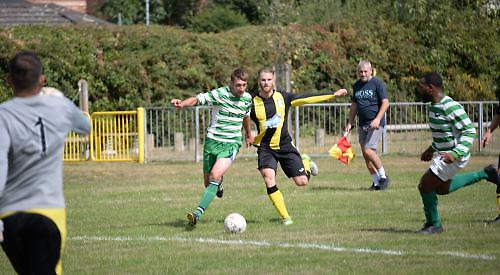 Both teams had started well but once Searle put his side in front, they began to dominate. Green kept attacking and eventually a Woodley defender fouled skipper Dan Donegan in the box, which Donegan converted. After the half-time break, Green started as they left off and after a great team move on the left-hand-side Donegan laid the ball for David Kingham to strike home for 3-0.

Green then began to drop off and Woodley took advantage, scoring two goals, the last of these a penalty. Despite many chances to score again, Green did not take them and they ran out 3-2 winners.

A 20-YARD looping shot from Liam Lukeman helped EMMER GREEN RESERVES to a 2-1 away win against BURGHFIELD RESERVES in their opening Division 3 fixture.

Lukeman’s lob of the goalkeeper gave a 1-0 half-time lead but at the break the greens were forced to change their number one due to injury, with Charlie Cubbage coming in.

After the restart Green’s Luke Potter chased on to a ball over the Burghfield defence and, cutting in from the left wing, he beat the goalkeeper from the edge of the box.

With 10 minutes to go Burghfield scored to make for a nervous ending but Green held firm.