Houseman’s late header puts side top of the table 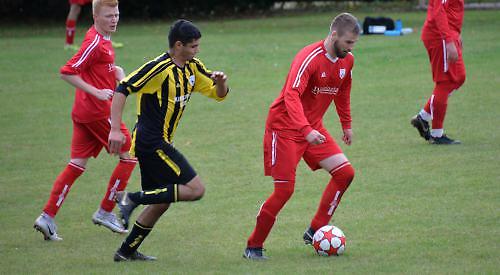 ROTHERFIELD UNITED moved to the top of Division 1 last Saturday after running out 3-2 winners at WOODCOTE RESERVES.

In a closely fought game at Woodcote Recreation Ground the visitors edged out their local rivals for the second time in three weeks.

Aaron Attfield opened the scoring for United midway through the first half when he converted a pinpoint cross from the lively Liam Bowbrick.

Woodcote responded well and levelled the game five minutes before the break when the ball fell kindly in the box and Kyle Fraser smashed home following a corner.

Rotherfield took control in the second half thanks to Liam Lukeman’s first competitive goal for the club, which was set up by skipper Ryan Richardson who nodded intelligently across goal.

The game then looked to be wrapped up with 20 minutes to go when Dwayne Clarke cut onto his right foot and unleashed a dipping shot from 25 yards, which sailed over the helpless Woodcote goalkeeper and into the net.

The home team battled gamely and forced their way back into the match when Nick Slatcher capitalised on a defensive error to reduce the arrears.

Elsewhere in the division WARGRAVE moved up to second place following a comprehensive 7-1 home win against COOKHAM DEAN RESERVES.

A scrappy first half saw Wargrave start to take control after 25 minutes. The deadlock was broken by Joseph Danelian after 30 minutes to give the hosts a 1-0 half-time lead.

Wargrave upped their game in the second half and made it 2-0 through Sam Wild before Bradley Reaiche made it 3-0. Cookham Dean pulled a goal back to make it 3-1 with 30 minutes of the match remaining.

Wargrave kept making chances and Wild scored his second of the game before Joe Wigmore made it 5-1. Danelian added his 2nd with less than 10 minutes to go before Richard Bookless scored the final goal to make it 7-1.

In Division 2 HENLEY TOWN drew 2-2 away at HURST RESERVES.

The game started slowly as both teams tried adjusting to the windy conditions. After 10 minutes Hurst were given a golden chance to take the lead when they were awarded a penalty but debutant goalkeeper James Aston pulled off a good save to deny the hosts. Minutes later Hurst took the lead when a pass back to the Henley goalkeeper hit a bobble as Aston was about to clear the ball away, allowing a Hurst striker with a simple tap in. Henley got level just before the break when Dan Chalfont flicked the ball over a Hurst defender and finished well just inside the box. Henley took the lead on the 80th minute when good work on the left wing saw Jacob Kasaska cross the ball for Nathan Horder who chested the ball down and finished with a well placed volley inside the box.

Henley were denied the three points with the last play of the game as Hurst headed home from a corner.

GORING UNITED moved to the top of Division 3 thanks to a 4-3 win at HAMBLEDEN.

Tom Canning, in the Goring goal, was by far the busier keeper and kept his side in the game bravely thwarting three one-on-one situations as well as making numerous saves. In the final minute of the half Goring created their first clear opportunity but from a good position Matt Ploszynski sliced his shot well wide of the goal.

After the restart the ball was given away and Canning was beaten at his near post by Ben Phippen. Shortly afterwards a promising Goring move involving five passes was broken up on the edge of the Hambleden area and with space in front of them the home side broke away for Ben Rackshaw to score an easy second goal.

Goring substitute Harry Voice soon halved the deficit when his determination gave him the opportunity for a clinical finish and the same player then equalised with a low effort that the keeper failed to hold. The visitors should have kicked on and dominated the game but from a right wing corner the ball wasn’t cleared and was bundled home from close range by Jordan Ridgley to put Hambleden back in front.

Goring pushed for the equaliser which duly arrived when Ed Ardill did well to play a ball back from the left giving Josh Monk the opportunity to force home a scrappy left footed effort.

A nail-biting finale ensued with Goring in the ascendancy but Hambleden looking threatening on the break. Just as a draw looked inevitable, with 60 seconds remaining. Goring forced a left wing corner. Matt Hayden’s inswinging delivery was met with a solid header from Dan Houseman to give the visitors an unlikely victory.

In Division 4 GORING UNITED RESERVES picked up a point as they drew 1-1 at TAPLOW UNITED VETS with James Mugford scoring for the visitors.