Wild’s second half treble helps side move into pole position 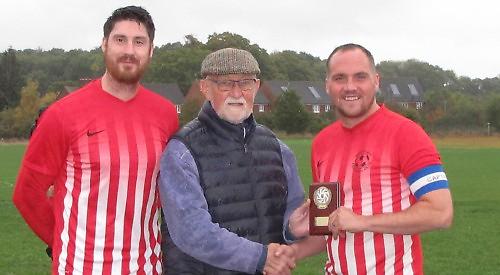 HOME side WARGRAVE, who were presented with the September Thames Valley Premier League team of the month award for September before their match, moved to the top of Division 1 after beating SLOUGH HEATING LAURENCIANS 5-3 last Saturday.

Slough started the game well and played the better football in the first half but it was Wargrave who took the lead when Stuart Moss squared the ball for Joe Wigmore to smash home. The visitors scored two goals to lead 2-1 at half-time.

Wargrave equalised quickly in the second half when Moss scored a penalty won by Joseph Danelian. Danelian then assisted Moss for the next goal to make it 3-2 to the hosts.

Sam Wild added his own second half hat-trick mixed in with another Slough goal to make it 6-3. Graham Bettes scored directly from a corner before Callum Hunter finished the scoring to make it 8-3.

Elsewhere in the division ROTHERFIELD UNITED went down to a 2-0 defeat at COOKHAM DEAN RESERVES.

In Division 2 HENLEY TOWN picked up a point as they drew 2-2 at HARCHESTER HAWKS.

In difficult conditions due to heavy rain and wind Henley had the first chance of the game when a Rowan Stacey corner almost went straight in but the Harchester goalkeeper managed to punch clear.

Henley took the lead just before the break when a Dan Sykes through ball found Harri Douglas inside the box who finished with a powerful low strike into the bottom left.

Early in the second half Harchester equalised through a 25-yard free kick. Henley started to take control and some strong running from Stacey won the visitors a penalty which Will Jaycock converted.

Henley were once again undone by a free kick which was floated into the box which the Harchester defender nodded down for their striker to equalise.

Berks started strongly playing a succession of long balls at the home defence but Goring looked resolute and were not unduly troubled. Eventually Goring’s passing game came to the fore and they started to dominate possession. A good move between the outstanding Matt Hayden and Josh Monk led to a penalty which Dean Robertson converted.

Goring thought they had increased the lead with a strike from Robertson, but the ball cannoned off the post and was scrambled to safety.

Another fine move involving Hayden led to Monk converting a low effort which was disallowed for offside. Soon after Matt Ploszynski set Monk free on the right for a chance that he finished with a low effort.

In the second half in worsening conditions, Berks County came back strongly, a long throw was flicked on with a back flick to present an unmissable header which halved the deficit.

The pitch was becoming a quagmire and with Berks sensing a comeback the game ebbed and flowed. Dan Houseman flicked home a Robertson free kick but was in an offside position before Goring regained their two goal lead when determination from Martin Greenwood gave Harry Voice the chance to fire in a low cross that Monk converted at the far post.

Berks refused to give up and scrambled home from a corner with 15 minutes remaining but there were no further clear chances as Goring hung on for the win.