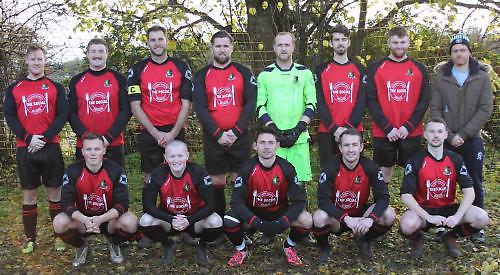 AFTER several weeks of cup matches, WATLINGTON TOWN returned to Division 1 action last Saturday where they ran out 3-2 winners at DRAYTON.

Town started brightly and the better of the two sides and took the lead when Kevin Hudson laid the ball back to the oncoming Darren Outten who made no mistake from 20 yards.

The lead was short-lived when the Drayton striker pounced on an error in the Town defence to slot home to level the scores.

The heavy pitch made it hard for both teams as the match became scrappy with neither side getting a foothold of the game. Drayton had grown in confidence as the half wore on and were denied by a fine double save from the visiting goalkeeper.

Drayton started lively after the break and took the lead when their striker was found in space in the box and took his chance well to give the home side the lead.

Watlington pushed Drayton back and started to take control of the game as a couple of half chances came and went with Chris Witchell striking narrowly wide after a well worked free kick.

The equaliser came through Jon Little when a ball into the box wasn’t dealt with and it fell kindly to him to fire home through a crowded box.

With both sides going for the winning goal it was Town who capitalised when the ball was played into Hudson in the box who touched it past his man and was brought down for a penalty. Up stepped Martin Williams who sent the keeper the wrong way to put town back ahead with four minutes remaining.

Drayton pushed for an equaliser and had a good chance when their lively striker twisted and turned on the edge of the box and found some space only to see his effort fire wide.

Meanwhile in the North Berks League Cup, WATLINGTON TOWN RESERVES comfortably progressed to the last 16 of the competition after thrashing visitors FARINGDON TOWN A 8-0.

Town started brightly with both wide men Liam Cox and Andy Gray having efforts over the bar and narrowly wide in the opening exchanges. Faringdon had set up in a 3-5-2 formation but never had an opportunity to get the wingbacks forward, so instead played with very much a flat back five.

The opening goal came from Gray, as he broke past his fullback and fired across the outstretched Faringdon keeper into the bottom right corner.

The second followed 10 minutes later when good work from Taylor Priddle and Gray saw the ball played to the onrushing Jaiden Hawkins whose venomous strike found the top corner.

The third goal came for Town when after some good interchanging play with fullback Conor B’layachi, Liam Cox whipped in a cross which Tom Bowden finished underneath the bar from six yards out.

The second half began much like the first ended, as Town piled on the pressure and made it 4-0 on 55 minutes after Gray’s cross was met by centre half Steve Outten as the Faringdon keeper was left standing.

Jaiden Hawkins added his second from an acute angle minutes later before a good ball from captain Gabby Heycock found the onrushing Outten in the area who lifted his finish over the onrushing Faringdon keeper.

Bowden added his second of the game, and was close to completing his hat-trick after a one-two on the edge of the box, his resulting finish beat the keeper, but struck the inside of the post and came out. Outten completed his hat-trick from centre half with a cool finish into the bottom right corner to make it 8-0.