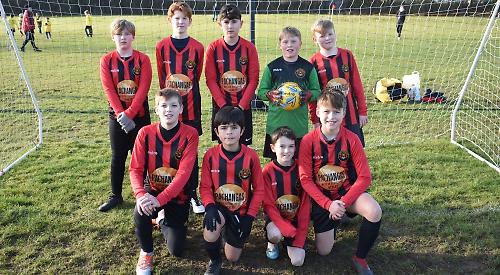 The visitors put up a spirited resistance for much of the first half and created a number of chances from which Henley were lucky not to concede.

Midway through the first half Henley made some tactical changes, introducing Christian Oswald to spearhead the attack. The change proved decisive with Oswald opening the scoring with a headed goal.

With the deadlock broken Henley swiftly added to the scoreline with Felix Grant pressing high to rob an Ashridge defender on the outside of the box and scoring with a perfectly weighted finish across the keeper to the far post.

Jake Jones added a third, cutting in from the left and lofting the ball over the goalkeeper and into the far right-hand corner of the goal. Oswald then created an unassailable 4-0 lead before half time, with a back heeled finish from Jones’s cross.

In the second half Oswald completed his second hat-trick of the season with a low strike from outside the box before man-of-the-match Sam Clark dispatched a left footed free kick over the wall and into the top right hand corner.

Grant wrapped up the match with the goal of the game. Starting with goalkeeper Jem McAllister the Hurricanes calmly passed through the thirds. Felix Butterworth passed out from the back to Charlie Wagstaff in midfield who split the Ashridge defence to the advancing Grant who proceeded to loft the ball over the advancing goalkeeper with an exquisite chip.

Elsewhere AFC HENLEY HURRICANES U12s went down to a 7-2 defeat against BURGHFIELD U12s at Jubilee Park.

The home side’s up and down season continued with another good display that produced nothing in terms of result.

For 15 minutes in the first half the Hurricanes were in control and pushing for the opening goal but with a lack of concentration and too many defenders pushing forward and out of position, Burghfield made a breakaway and despite a solid performance from hosts’ goalkeeper Luca Coleman, scored against the run of play with a fortunate looping ball over his head.

Hurricanes once again lost their way in trying to get back on level terms and found themselves 3-0 down by half-time.

The second half started the same way with Hurricanes pushing to get into the game but some sloppy play throughout the team resulted in Burghfield countering with another couple of goals to make it 5-0.

With 15 minutes to go the Hurricanes rallied and pulled two goals back but by this time the game was gone and too much pushing forward resulted in a further two breakaway goals for the visitors.