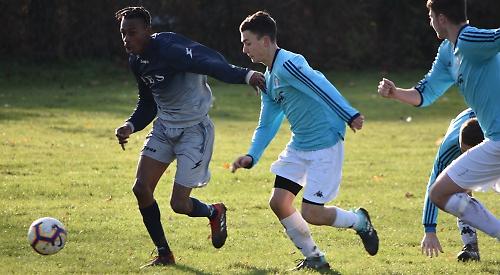 EMMER GREEN RESERVES picked up a point in their Division 2 home clash with CAVERSHAM UNITED.

The home side took the lead within 30 seconds when Charlie Cooper’s through ball found debutant Reuel Griffith who finished precisely.

Emmer Green were pegged back on the half hour mark when Caversham United scored from a corner to level the game. Emmer Green took the lead again from a corner themselves when Nathan Bovell headed home from close range.

Caversham showed plenty of heart and managed to equalise for a second time and this time it was a long throw which undid the Emmer Green defence.

In Division 4 GORING UNITED ran out 9-1 winners away at ZONE RG. Andrew Taylor scores a hat-trick for the visitors whilst there were also goals from Josh Monk, Tom Brownlow, Dan Wallace, Dave Woodley, Jamie Masters and an own goal.

In the Tilehurst Charity Cup, visitors EMMER GREEN secured their place in the semi-finals following a hard fought 4-0 win away at ENGLEFIELD.

In a first half of few chances Emmer Green got the breakthrough when Kenny Evans whipped in a ball for Lorenzo Medford to head home to put the visitors ahead at half-time.

In the second half Emmer Green pressed and began creating several more opportunities. A good move was rounded off when Daniel Donegan smashed home from the penalty spot. Daniel Donegan got his brace whipping in a trademark free kick into the top left-hand corner from 25 yards out to make it 3-0.

The scoring was rounded off as it began with a calm finish from Medford inside the penalty area after a great ball from Sam Sheppard.