Two see red as Woodcote lose out on their travels 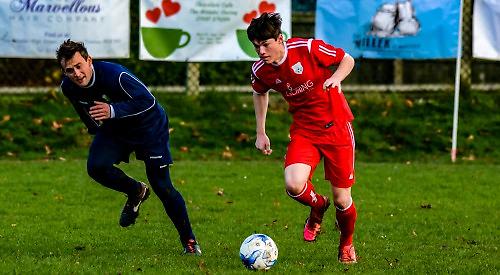 WOODCOTE — a team in transition after the departure of manager Sam Tucker and several other players — included six teenagers in their squad after agreeing a link-up with Bracknell Town Youth Academy but this didn’t prevent them from slipping to a 3-1 Premier Division defeat at FINCHAMPSTEAD last Saturday.

The performance was disjointed with players trying to get used to each other’s style of play. Woodcote might have taken the lead early on with a good shot from skipper Tommy Chapman brilliantly tipped over by the home keeper.

It was the home side which took the lead midway through the first half from the penalty spot. Finchampstead added to their lead on 39 minutes when Woodcote failed to clear a corner and a striker pounced to score from close range. Things then got worse when Chapman received a straight red card for a rash challenge.

Woodcote’s 10 men seemed much better organised in the second half and they held out until the 70th minute when a good strike from the edge of the box made the score 3-0.

Woodcote’s consolation goal came shortly afterwards when a pull back from James Worsfold was converted by debutant Marlon Morales. In the dying minutes Josh Millar also saw red after an altercation with a home player.

In Division 1 league leaders WARGRAVE ran out 2-0 winners away at ELDON CELTIC.

In a hard fought encounter the hosts enjoyed some good possession but Wargrave took the lead through Michael Few in the first half.

Eldon had more possession in the second half as Wargrave played on the counter attack. The hosts didn’t create many chances as Wargrave’s back four were solid and the visitors created several chances on the counter attack, finally making it 2-0 when Sam Wild was fouled by the Eldon keeper and Stuart Moss scored the resulting penalty.

Elsewhere in the division ROTHERFIELD UNITED ran out 3-2 winners away at IMAAN. The visitors raced to a 3-0 lead in 30 minutes after capitalising on some slack defending.

Aaron Attfield was first to score as he raced on to a Mark Sumner through ball and slotted past the keeper.

Attfield was at it again moments later when he intercepted a loose pass from the keeper and rounded him to slot into an empty net.

Liam Bowbrick was next to find himself through on goal but his left footed shot was sliced wide. It wasn’t long before he added another goal to an impressive debut season as he was on hand to tap in after the keeper dropped the ball at his feet under no pressure.

Imaan changed formation and got back in the game after the break, scoring two quick fire goals and heaping the pressure on Rotherfield but the visitors held out, helped by some assured possession from man of the match Jake Bateman in the closing stages.

WOODCOTE RESERVES gained their second win of the season as they triumphed 2-1 at WESTWOOD WANDERERS RESERVES and in so doing swapped places with their opponents at the foot of the table. Woodcote’s goals were scored by Darren Russell and Andy Taylor.

GORING UNITED extended their lead at the top of Division 3 with a comprehensive 6-0 victory against MORTIMER WANDERERS.

United asserted themselves from the kick-off and after just two minutes a low driven corner from man-of-the-match George Scoffham was turned in at the near post by Matt Ploszynski.

After 10 minutes Goring doubled their lead when Ben Fuller’s first touch from a Dean Robertson 50-yard crossfield ball took him past the keeper giving him all the time in the world to roll the ball home. Mortimer’s afternoon became worse when George O’Brien’s low cross was sliced into his own goal by a visiting defender before Ploszynski’s through ball was seized on by Josh Monk who smashed the ball into the top corner.

The second half continued in a similar vein with Goring having almost all the ball and creating numerous chances.

The fifth goal followed when Matt Hayden drilled home from 18 yards before O’Brien made up for a glaring headed miss by turning home at the far post. More chances followed but none were converted.