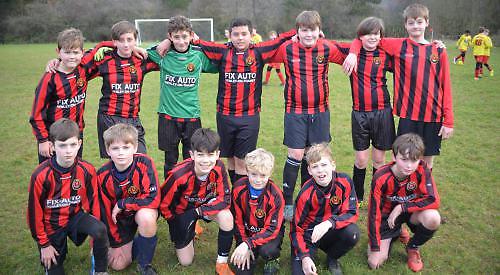 The Hawks started strongly and dominated early play as Jenson Lea found Harry Graham with a well-placed pass from the left who took a shot on goal which was blocked. After more pressure from the Hawks attack, Graham put in a pass to George Acock who put the ball in the back of the net to give the Hawks the lead after five minutes.

Daniel Flowers was strong at left back and the team benefited from his long and accurate throw-ins, one of which led to a shot on goal by Mikey Dowling that was blocked by the defence. Rory Pearson was similarly strong making some powerful clearances for the Hawks to counter from.

Lea, Harry Floyd, Acock and Lillie-Maye Clark moved the ball around a clumpy soft pitch and kept the Hawks in dominant form.

After nine minutes a Lea throw-in found Clark who passed a defender and took a shot which the keeper held.

The Predators countered and Dowling, Louis Catlin and Pearson managed to rebuff their attempts but they broke through at 13 minutes levelling the score.

Lea then made a break down the right and crossed it from deep in the corner to Graham. Soon after Acock’s persistence won a corner for Henley but the defence hit it out for another corner that Clark took but wasn’t converted.

A foul led to a free kick for the Predators from which they took the lead after 20 minutes.

The Predators now had their tails up and were pressing the Henley defence with a lot of action in the Hawks’ penalty box. Goalkeeper Max Lunnon made some good blocks and long clearances while Pearson cleared the ball from the Hawks’ goal line before Clark put it out to safety. In the second half, the home defence were being called on again with Pearson making some key clearances and Catlin coming off best from a one-on-one with the Pinewood striker.

The Hawks continued to push for an equaliser and at 55 minutes, Lea put in a corner which Graham volleyed but the ball was blocked by a Pinewood player. Play was end-to-end and Lunnon was forced into a good save a couple of minutes later. His kick led to a speedy counter by the Hawks and Ben Hemmings put in a shot that was deflected out for a corner. The Hawks were again in command of possession and opportunities were numerous from a well-placed throw-in from Dowling which went via Lea to Clark, before his shot went just wide of goal.

The resulting goal kick from the Predators found their striker who outpaced the Henley defence and scored to make it 3-1. The last five minutes of play was all Henley and pressure from Dowling and Graham resulted in a ball to Lea and an arching shot that went inches over the crossbar.

The final minutes saw the visitors counter and force Lunnon into another good save and a goal line clearance from Acock. The ball moved back towards the Predators goal with a one-two from Lea and Graham which resulted in Graham’s shot going just wide of the goal.