Watts’s goal enough to secure the points for Henley Hotspurs 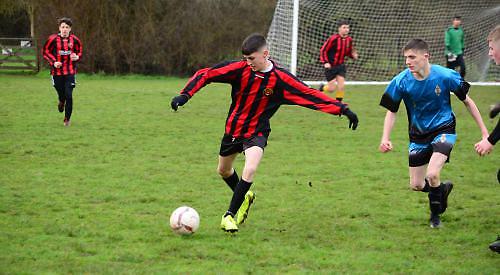 From kick-off Reading Falcons were up for a battle and looked the most dangerous side for the first 10 minutes putting Henley under pressure with over the top balls.

It took a while for the Hotspurs to react but when the midfield of Henley, made up of a rotating combination of Zodey Sabijan, Felix Butterworth, Will Symonds and Ollie McKinnon, started to get more involved the home side looked the more threatening side.

With the pace of Will Saunders and Dan Watts on the wings it didn’t take long for Henley to work out this was their biggest strength and this resulted in Watts smashing in a volley in at the near post following an attack down the left wing.

Seemit Gurung was constantly battling with the combative defenders of the Falcons, with his link up play to the two wingers almost paying off to double Henley Hotspurs’s lead.

The closet Henley came to scoring another was from a 25-yard free kick by Will Symons, but a good save from the Reading Falcons keeper meant the hosts went into half-time with a one-goal lead.

Straight from the kick off Reading Falcons nearly scored with an audacious 50-yard attempt which was tipped onto the bar by Matthew Balchin.

Shortly after this the Falcons almost equalised with another over the top ball for their striker which was met by an outrushing Balchin in goal who just managed to clear the ball, taking out a Falcon player and a teammate in the process.

This spurned on the Falcons and were it not for the combined defensive effort of Patrick Organ, Adam Palmer, Owen Simmons and Elias Madzar, Henley could have conceded.

As the game went on Henley slowly started to look the better side, forcing multiple saves from the Falcons keeper, but not quite managing to find the back of the net.

The game fizzled out in the last 10 minutes with both sides tiring after a hard-fought game in windy conditions.