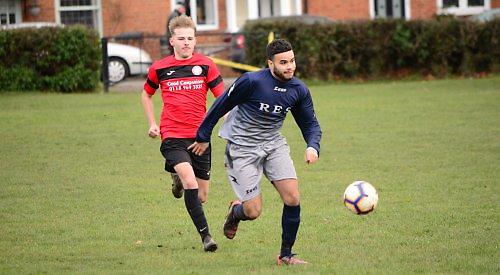 HOST side EMMER GREEN RESERVES got the New Year off to a flying start as they put seven goals past high-flying GC UNITED at the Recreation Ground on Sunday.

Emmer Green took an early lead after Lorenzo Medford delivered a cutting pass to Charlie Cooper who crossed to Ashley Searle to head home after 10 minutes. Joe Mcdonagh doubled Emmer Green’s lead with his first goal for the club with an instinctive volley from just outside the area.

Emmer Green scored a third before the half-hour mark when Lorenzo Medford went one-on-one with the goalkeeper and dinked the ball over him. Soon after the home side scored their fourth after Charlie Cooper was fouled in the box and Daniel Donegan scored the resulting penalty to put Emmer Green in control at the break.

GC United hit back and, with nothing to lose, threw men forward and scored a scrappy goal just on the half-time mark.

Emmer Green were dominant in the second half and against the run of play GC United pulled another back following a controversial penalty decision.

Emmer Green added another two goals late on when Medford hit his second of the game and an own goal by a GC United defender put the game well and truly out of reach for the visitors as the hosts triumphed 7-2.