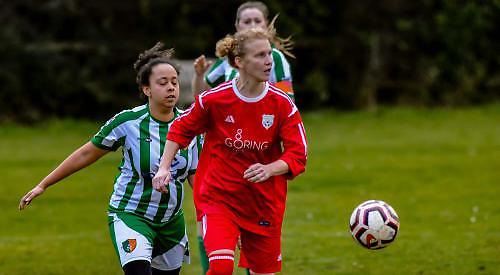 HARRIET WALLER netted a hat-trick while Louise Axon bagged two goals as hosts Goring United Ladies got the new year off to a flying start by beating visitors Yateley United 5-1 in a physical encounter at the Sheepcot Recreation Ground last Sunday.

Waller put her side 1-0 up after 16 minutes before Axon headed home from a corner nine minutes later to double her side’s lead. Yateley pulled a goal back on the half hour mark to make it 2-1 at half-time.

Twelve minutes into the second half player-of-the-match Waller scored her second of the match before completing her hat-trick a goal direct from a corner after 76 minutes. Axon wrapped up the scoring on 79 minutes to complete the 5-1 scoreline.