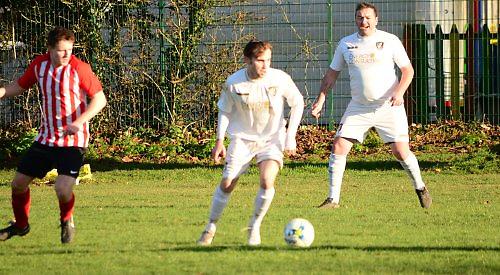 WOODCOTE’S hopes of getting the second half of their Premier Division season off to a good start were blown apart in a first-half of total dominance by hosts WINDLESHAM UNITED last Saturday.

A mixture of good luck and good goalkeeping by Ben Lament kept Woodcote in the game as Windlesham could have been out of sight by the break.

Two fine saves inside a minute by the Woodcote keeper kept the score at 0-0 until the 23rd minute when a free header at a corner gave Windlesham the lead.

As the half neared its end the home side were awarded a penalty but Lament pulled off an astonishing save. Tt the end of the half it took a good save from the home keeper from Jake Dillon’s free kick, to stop Woodcote from equalising.

Ten minutes into the second half Windlesham extended their lead from the penalty spot after a handball in the area and they soon made it 3-0 direct from a free kick.

In the last 20 minutes Woodcote found some of the firepower which had been lacking up until then and they were rewarded late on with skipper Jake Bailey converting from close range after a free kick from Frank Dillon.

Wargrave got off to a good start and took an early lead through Sam Wild before Woodcote equalised through Justin Trow.

Wild made it 2-1 to the visitors, cutting in from the right and hitting a low shot into the bottom corner.

Joseph Danelian added his side’s third, following up on a shot from distance and rounding the keeper to pass into an empty net.

The second half saw Wild square the ball for Stuart Moss to make it 4-1 before Danelian added his second of the match, picking the ball up inside his own half and running through the Woodcote defence before going around the keeper again to slot home.

Moss made it 6-1 before Adam Hawkins added the last goal heading home from a corner for 7-1.

Elsewhere in the division ROTHERFIELD UNITED went down to a 2-0 defeat at Bishipswood against MORTIMER RESERVES.

In Division 2 HENLEY TOWN drew 2-2 at TWYFORD AND RUSCOMBE in their final away league match of the season.

The visitors were boosted by the availability of several players returning from injury and were able to field a full side with four substitutes.

On a heavy but playable pitch both sides were unable to get control of the ball and decided to play the long ball game.

After six minutes the first chance of the game fell to Twyford and Ruscombe with a 25-yard shot going just over the top of the Henley goal.

Henley won their first corner after 10 minutes which was met by Ritchie Vallis but his header was saved on the line by the home side’s goalkeeper.

After 24 minutes Jake Kasaska had a break through the centre of the home defence and tucked the ball away to give Henley the lead. Twyford equalised on 37 minutes from a corner to make it 1-1 at half-time.

Three minutes into the second half Twyford and Ruscombe went down to 10 men as one of their players was sent to the sin bin for 10 minutes.

After 65 minutes Twyford and Ruscombe’s goalkeeper and defence made a hash of a short goal kick and Henley’s Vallis pounced and scored his second of the game.

With four minutes of the match remaining the hosts were awarded a penalty which they converted to make it 2-2.

After the restart and three minutes into time added on tempers were raised as both teams were reduced to 10 men as the match fizzled out into a 2-2 draw.

In Division 3 GORING UNITED were knocked off top spot as they were held to a 3-3 draw at MORTIMER WANDERERS.

After two minutes a long ball over the top evaded the Goring defence forcing Tom Canning into a brave save. However, the warning wasn’t heeded and Goring were frequently caught during the first half.

After five minutes Goring took the lead with their first effort when Dean Robertson’s free kick was finished at the far post by George Scoffham. Shortly afterwards an Oli Rayner free kick was headed home by the unmarked Dan Houseman.

Within 10 minutes poor defending allowed Mortimer to draw level. A speculative cross from the Mortimer right was left to an unsighted Canning and was subsequently bundled home from short range at the far post. Almost immediately another cross from the same side allowed a free header which gave Canning no chance.

After 20 minutes Goring regained the lead from one of their few cohesive moves of the game. Josh Monk broke clear on the right wing and his cross from the byline was neatly headed home across the keeper by man-of-the-match Matt Hayden.

The game became a scrappy affair with both sides regularly giving away possession. This continued until the 75th minute when hesitation in the Goring defence allowed a simple close range finish.

Elsewhere in the division HAMBLEDEN went down to a 3-2 defeat away at BERKS COUNTY RESERVES. Wayne Croxford and Tom Ellis were on target for the visitors.

In the Berkshire Trophy Centre Junior Cup second round clash at the Triangle Ground, GORING UNITED RESERVES made progress after beating HENLEY TOWN DEVELOPMENT 3-0. Dan Reynolds netted twice whilst Dan Carter was also on target for the visitors.