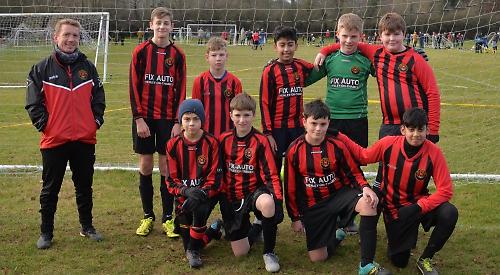 AFC HENLEY HURRICANES U13s ran out comfortable 5-2 winners at WINDSOR JAGUARS U13s in last Saturday’s Division A clash in the East Berks League in a match that saw the forward line of Harvey Herbert and Henry Mendelssohn shine for the visitors.

The Hurricanes started brightly and it was Herbert and Mendelssohn that got the ball rolling. A pinpoint corner by Mendelssohn found Herbert five yards out and he powered home an unstoppable header.

Ethan Holliday was having the game of his life and he hit a pile driver from 25 yards out that the Windsor goalkeeper had to be at his very best to claw away from the top corner.

The Henley defence was well led by captain Finnbar Scott as he marshalled the back line efficiency. Oliver Saunders was his centre back partner and his shrewd tactical positioning and reading of the game limited the chances Windsor had.

The second goal for the visitors came courtesy of some hard work by Mendelssohn as he chased down the Windsor keeper after he tried to dribble the ball out before robbing him and slotting home to make it 2-0. In what had looked a comfortable half for the Hurricanes they gave away a sloppy goal to give Windsor hope of a comeback.

Henley came storming back with a free-flowing goal that came about through the three combative midfielders as Tom Yeoman passed the ball to Joe Turner who then found Tom Atkinson. Atkinson spotted the run of Herbert in the inside right channel and Herbert needed no second invitation to smash his second of the game into the back of the net to make it 3-1 at half-time.

The Hurricanes conceded early in the second half as Windsor tried to get back into the game.

Henley fullbacks Tom Bonser and Henry Steel remained resolute and committed in the tackle as the Windsor wingers were given little room to manoeuvre. When Windsor did get through they found themselves against Hurricanes keeper Ben Horner whose assured handling and effective distribution gave the visitors a solid base to build from. It was Mendelssohn again who played in Herbert and the man-of-the-match hit a 20-yard shot which left the Windsor keeper with no chance as Herbert claimed his hat-trick. The Hurricanes were now brimming with confidence and Joe Winpenney was surging forward at every opportunity from his left back position assisting winger Morgen Wynn-Jones who had just returned from injury. It was left to Holliday to round off proceedings as Herbert slipped him in and he made no mistake from 10 yards out.

HAMBLEDEN slipped to second from bottom in Division 3 after they were held to a 4-4 home draw at home to high-flying MARLOW UNITED RESERVES.

Newly-formed AFC HENLEY HARRIERS U13s lost out in their first game as they went down 7-4 against ASCOT COLTS U13s at Jubilee Park.

The first half saw Callum Gaffney in goal and the defence of Louis Catlin, Vibhu Vadhoolan, Rory Pearson and Will Tebbutt coped well and repelled attack after attack from a team that scored 16 in their previous outing.

The counter-attacks from the Harriers caught the Colts out many times and it was just a matter of time until the breakthrough came.

The opening goal came after some sustained pressure in the Colts area as one of their players handled the ball. The penalty was coolly dispatched by Jenson Lea.

For the first half the Colts backline had no answer to the pace of the Harriers front three of Connor Quinn, Lea and George Acock.

When the Colts did get the ball back they found a resolute midfield in the Harriers of Flavio Merennage, Louis Wilson, Max Messias, Harry Floyd and Daniel Lennon.

The Harriers scored two more goals through Acock and Lea to go in 3-0 up at half-time.

The second half saw a revitalised Colts come at the Harriers, aided by the wind and the lack of cohesion that sometimes befalls newly formed teams, the Colts laid siege to the Harriers defence and quickly pulled two goals back.

This gave the visitors renewed confidence and knocked some wind out of the Harriers sails, and, although the hosts added a fourth through Quinn it was soon 4-4 and all to play for.

It was a tight game until the final 10 minutes and at this point the differences in the familiarity of their team members was noticeable as the Colts added three more quick goals that sunk the Harriers. The stand-out performer for the Harriers was Catlin in defence.