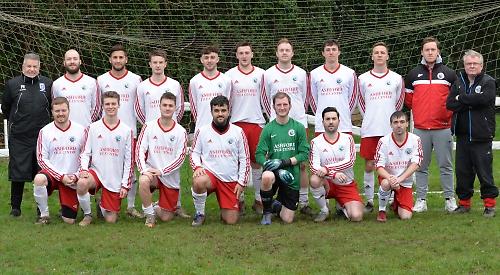 WOODCOTE narrowly went down to a 2-1 defeat at home against RICHINGS PARK in last Saturday’s Premier Division encounter.

In windy conditions, good football was at a premium and the visitors exploited the wind at their backs in the first half to take the lead on 40 minutes with a volley from the edge of the box.

In the second half Woodcote had much more possession and they were unfortunate not to equalise on 80 minutes when Elias Hannibal’s powerful strike came back into play off the inside of the post.

In Division 1 league leaders WARGRAVE slipped to a 1-0 defeat at home to local rivals HURST.

Elsewhere in the division ROTHERFIELD UNITED moved up to third place after beating FC IMAAN LIONS 3-2 at Bishopswood.

United goals came from an own goal and strikes by Liam Bowbrick and Deshawn Whittaker in a match that saw the visitors have a player sent off after 30 minutes.

WOODCOTE RESERVES remain rooted in the bottom two after a disappointing 3-0 defeat away at COOKHAM DEAN RESERVES.

HENLEY TOWN moved up to fourth place in Division 1 after beating visitors PHOENIX OLD BOYS 2-1 at the Triangle Ground.

The hosts started the game brightly and after just two minutes Jacob Kasaska went through the visiting defence but saw his shot go narrowly wide of the post.

On five minutes Daniel Chalfont shot over the bar before the visitors started to get back into the game.

Henley then broke away on a counter-attack as Kasaska played a through ball to Chalfont who beat the goalkeeper to but the home side ahead. On the stroke of half-time the visitors levelled when they scored direct from a corner. In the second half Henley made a couple of substitutes bringing on Nick Holzer and Liam Painter.

These two played combined on the hour mark as a Painter through ball found Holzer who lobbed the Phoenix goalkeeper from the edge of the box.

Henley dominated possession but late in the game the visitors went close to levelling the scores but were denied by a good save by Shawn Batten Vickers in the Henley goal.

Goring started the brighter of the two sides and were winning the physical battles, although Henley did have their fair share of the ball too.

Dan Carter put the home side 1-0 up after reacting quickest after Eddie Packman’s shot from the edge of the area cannoned back off the crossbar. With Henley defenders flat-footed, Carter pounced on the loose ball to fire his side ahead from close range. This goal stirred Henley into life and they began putting some good attacking moves together down the slope.

Henley were awarded a penalty after the ball struck the hand of the Goring skipper Jack Read-Wilson. However, Dudley Powell failed to convert from the spot as his effort went wide of the post. This was Henley’s only real chance of the game as the Goring centre back pairing of Read-Wilson and man-of-the-match Rob Ellington dealt comfortably with any attacks by the visitors.

In the second half Goring turned the screw and two goals from top scorer Dan Reynolds put the game beyond doubt. A well taken goal from joint player manager John Ramsay capped off the win with 10 minutes of the match remaining. Ramsay turned quickly in the box and fired home with his left foot.