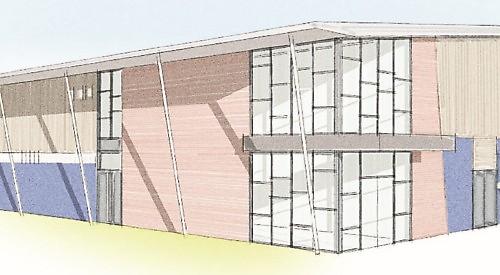 A YOUTH football club says it isn’t being offered enough space under Henley Town Council’s plans to relocate its clubhouse.

The council intends to build a new £2 million facility at Jubilee Park, off Reading Road, which would be shared by AFC Henley and Henley Hockey Club while their old premises across the street would be redeveloped for housing.

But AFC Henley says it has been given less than a quarter of the total floor space while the hockey club would get more than half and this is unfair.

The hockey club would get about 134 sq m, excluding toilets and kitchens, while the football club would get 74 sq m, which is above Sport England’s requirement of 60 sq m for a club of its size and more than the 49 sq m it has currently.

The council and its developer, T A Fisher, of Theale, would also install a new 3G all-weather artificial pitch costing between £900,000 and £1.2 million.

The new building would also have a 100 sq m community room, which the club wants to be part of its allocated space but the council says must be remain separate so it can be hired out.

The council insists club chairman Trevor Howell accepted this during confidential talks last year but he says he doesn’t recall this and has appointed a solicitor to ask councillors to consider a more equal allocation of space.

Speaking at a council meeting last week, Mr Howell said: “I want to make very clear that AFC Henley feels it has been pushed into a difficult corner.

“We feel aggrieved and believe a more equitable solution should be found.

“We are a substantial club serving more than 600 children and their families, about 10 per cent of the town’s population. We operate six days a week across three grounds and have 22 teams playing league football.

“Hundreds of people come to see our matches so we’re certainly not ‘small fry’ and we expect to be treated as a sensible and mature organisation.

“Looking to the future, the revenue generated on that site will come mostly from football-related activities. There could be a turnover of £80,000 to £90,000 per year so this is a significant investment.”

Mayor Ken Arlett replied: “Trevor has only given part of the story. Negotiations have been ongoing between the hockey club and the football club since I came on to the council.

“Six months ago, we agreed a size with Trevor which is bigger than their current clubhouse, which they hardly use.

“If we build a new 3G pitch at Jubilee Park we’ve offered to completely fence off the area, landscape it and give you bigger pitches, all for the cost of £1,000 a year.

“You’ve agreed with this — it has all been minuted and now that you’ve got a lawyer on board you think you can hold this town council to ransom and change it.

“We will email your lawyer saying we won’t be changing our position. We’ve offered so much over five years and it has reached the point where we cannot offer any more.”

But Councillor Arlett told the Henley Standard: “We can’t let the football club have the same area as the hockey club because they won’t use it all and we can’t afford to lose the revenue from hiring.

“This has come from nowhere and it’s too late because everything’s agreed.

“If they wanted to pay about £20,000 a year for that space, they could have had it. They’re getting a very good deal which we’re very happy to offer for the benefit of the youngsters and we could revisit it in years to come if they start playing men’s football.”

The old 0.9-acre clubhouse site is earmarked for housing under Henley’s neighbourhood plan and about 35 flats could be built on it.

The new two-storey clubhouse would have a first-floor social area with kitchens, a bar and a viewing deck.