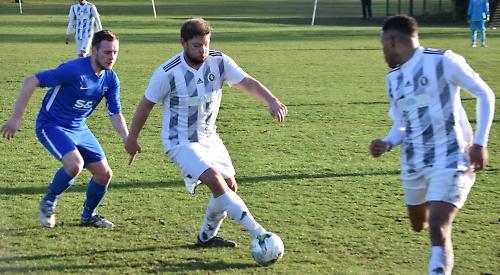 WOODCOTE got back to winning ways as they defeated Premier Division third placed side MAIDENHEAD TOWN 5-2 last Saturday.

The win provided a morale boost after the villagers had lost their first two games of the new decade.

The visitors started in confident style, playing good possession football, but Woodcote looked more threatening on the break and it was the home side which broke the deadlock after 20 minutes. Tommy Brownlow, up from the back, nipped in to convert from Jake Dillon’s dangerous cross.

Maidenhead were behind for only four minutes, equalising with a well-placed direct free kick. Woodcote restored their lead on the half-hour mark, Tommy Chapman converting from close range after Frank Dillon’s corner had been headed back into the danger area by twin brother Jake.

On 35 minutes only a wonder save by the Maidenhead keeper prevented Pedro Monteiro from scoring with a neat flick from another Jake Dillon cross.

Just before half-time a head injury robbed Woodcote of the services of Frank Dillon, whose corners and crosses had kept the Maidenhead defence under pressure all afternoon.

With the half-time score at 2-1 Woodcote might have expected an onslaught from the high-flying visitors but it never really materialised and, on the hour mark, a bizarre own goal from a back-pass made the score 3-1. Ten minutes later it was 4-1 as Jake Dillon headed home Brownlow’s free kick and then 5-1 as Monteiro steered Jake Dillon’s cross into the path of Justin Trow, for the substitute to provide a neat finish.

In Division 3 GORING UNITED returned to form as they beat visitors PHOENIX OLD BOYS RESERVES to move up to second place in the table.

From the kick-off the home side dominated their opponents after 20 minutes the deadlock was broken when a defender handled a high ball giving the referee no option but to award a penalty which was converted by Matt Hayden.

A second soon followed when another penalty appeal was denied by the referee before Matt Ploszynski calmly slotted home from the edge of the area. After 15 minutes of the second half Goring attempted to overplay the ball out of defence and Phoenix took advantage of a rare opportunity to bring themselves back into the game with a calm lob over the otherwise untroubled Tom Canning. Goring hit back when George Scoffham played a ball to Josh Monk who controlled well and beat the keeper with a clinical finish.

Goring continued to dominate play but failed to convert a number of chances before Monk was tackled to the ground after escaping the defence on the right hand side. From Hayden’s pinpoint free kick the unmarked Dan Houseman headed home.

In Division 4 HENLEY TOWN DEVELOPMENT went down to a 5-1 defeat away at high-flying TAPLOW UNITED VETS.