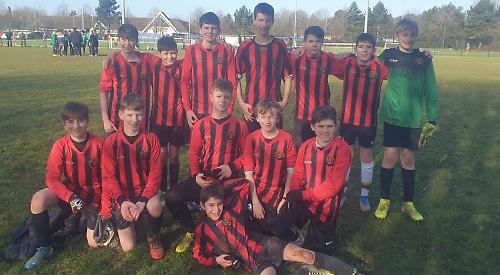 The Hurricanes found themselves 1-0 down early on as Eldon were gifted the freedom of the Hurricanes penalty area and made no mistake from 10 yards out.

As the half went on the hosts started to get a foothold in the game as Finnbar Scott muscled his way through the Eldon defence after Harvey Herbert slipped him through to poke the ball home and level the scores.

Ben Horner, in the home goal, had to be at his best to keep the scores level as he pulled off a great save to push an Eldon effort round the post for a corner which came to nothing.

Midfielder Henry Mendelssohn created time and space to spot the run of left winger Sam Robinson and released him with an inch perfect pass. Robinson glided past three Eldon defenders before calmly slotting the ball past the keeper.

Joe Winpenny was playing a key part in the Henley back line and he had to make a key intervention to stop an Eldon attack. Captain Luca Thomson was using his strength to see off the tricky Eldon number nine whilst sweeping up behind him was the assured Oliver Saunders. In the second half Joe Turner unleashed a drive from 25 yards out that forced the visiting keeper to make a stunning save.

Turner was not to be denied though and he set Robinson free in the inside left channel and again Robinson went on a mazey run that ended with a calm finish inside the near post to make it 3-1.

Confidence was now brimming in the home side and Herbert played in Tom Atkinson who made no mistake from close range with a predatory strike.

More of the same was to follow as Herbert notched a hat-trick of assists as he again played in Atkinson who wrong-footed the keeper with a cheeky finish and completed the scoring.