Lovelock goal sends side into semi-finals 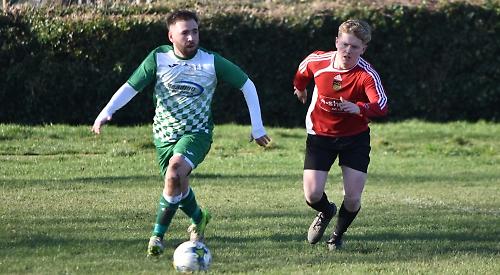 EMMER GREEN set up a second semi-final of the season with a hard fought win against TWYFORD COMETS on a cold morning at the Recreation Ground in the Berks and Bucks Intermediate Cup.

On a wet surface both teams struggled to gain control in the opening exchanges. Emmer Green who took control just before the 30 minute mark. A smart forward ball from Kaser Chowdhary led to Jordan Lovelock competing well in the air with the Comets’ goalkeeper and tapping home into an empty net.

Emmer Green had the fair share of possession in the second half and could have put the game to bed with numerous clear cut opportunities. Firstly, Luke Donegan swivelled and hit a shot straight at the Comets keeper, and when the defender knocked it back to the keeper, Emmer Green were awarded an indirect free kick five yards from the goal line. With 10 players on the line captain Daniel Donegan couldn’t convert a tough opportunity.

Emmer Green kept creating more opportunities when Ashley Searle crashed a header off the bar and Daniel Donegan was inches away when sliding in at the back post.

Meanwhile in the Reading and District League just three fixtures were played with the remainder of matches being postponed due to the freezing conditions. In Division 4 league leaders GORING UNITED thrashed hosts TILEHURST TITANS 13-0. Andrew Taylor scored a hat-trick whilst there were braces for Dan Wallace, George Scoffham, Archie Helas and James Mugford as well as one each for Matt Hayden and Dan Carter.