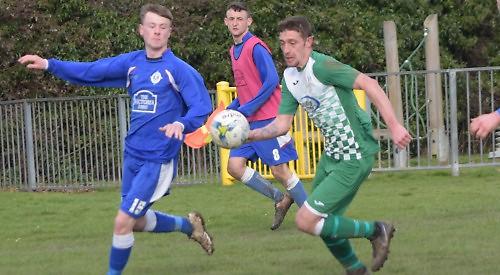 EMMER GREEN moved five points clear at the top of the Senior Division table following an emphatic 6-0 win against third placed side BURGHFIELD.

Emmer Green took control after just 50 seconds when Lorenzo Medford crossed for Ashley Searle to head home from close range. As the first half advanced Emmer Green had plenty of chances but the Burghfield goalkeeper made some great saves to keep the visitors in the game.

The home side won a free kick on the edge of the penalty area and Daniel Donegan curled the ball into the top left corner to make it 2-0. The next opportunity Emmer Green had was another free kick, this time from 25 yards. Again Daniel Donegan stepped up and converted, this time in the bottom right corner of the goal.

The second half saw Emmer Green produce some of their best football so far this season and their fourth goal was produced by a moment of good flowing football. Jordan Lovelock found Daniel Donegan, who played a clever one two with Lorenzo Medford and calmly tucked the ball into the bottom right corner to give Donegan his hat-trick and Medford his second assist of the game.

Medford again produced some good play as he released Jordan Lovelock into the Burghfield penalty area to poke it under the goalkeeper for 5-0.

Emmer Green made it 6-0 with the final kick of the game as substitute Luke Donegan raced through from halfway and opened up his body with a composed finish. This was a good performance from Emmer Green with some important blocks in the first half from Dave Kingham, Kaser Chowdhary and John Donegan.

In the Premier Division visitors HENLEY TOWN secured a point in a 3-3 draw at BARTON ROVERS. Henley started the game slowly and soon found themselves a goal behind when the Barton striker managed to tap home from close range.

The visitors gathered some momentum for 30 minutes of the first half and created a few good goal-scoring opportunities but couldn’t convert any. On the stroke of half-time Barton doubled their lead when a rebounded shot was fired home.

Henley started the second half well with Sam Earl and Dan Sykes controlling most of the ball in midfield and the visitors pulled a goal back when George Carder made a good run and fired home into the middle of the goal. Henley soon found themselves level when Jack Earl played in Charlie Douglas who finished calmly into the bottom corner.

Heading into the final 15 minutes Henley were on top and made a remarkable comeback when Jack Earl smashed home from just outside the box.

With five minutes of the match remaining Henley had appeals for a penalty turned down by the referee. Barton Rovers then won a free kick on the halfway line and as the ball was played into the box the Barton striker bundled the ball into the goal.

Free scoring GORING UNITED, who triumphed 13-0 the previous week, ran out 6-0 winners at home to THAMES VALLEY RAILWAY to move to maintain their position of league leaders in Division 4.

Matt Hayden fired a strike over the visiting keeper on 10 minutes to give Goring the perfect start. Dan Wallace then provided a neat finish, following good work from Josh Monk down the left-hand side.

George Scoffham made it 3-0 after just 20 minutes, after yet another assist from Monk. Rather than killing the game off, Goring took their foot off the gas and allowed the away side to get a foothold in the game. However, any attacks were well dealt with by centre back pairing Oli Rayner and James Williams.

In the second half Goring dominated the match and it was route one football that led to Wallace scoring his second of the game, as he chipped the ball over the keeper following a drop kick from Goring goalkeeper and skipper Andrew Symonds.

Substitute James Mugford scored Goring’s fifth with a well-taken volley. Wallace rounded off the win and completed his hat-trick with the last moment of the game. After a poor free kick, Wallace found himself unmarked in the six-yard box to nod the ball home.