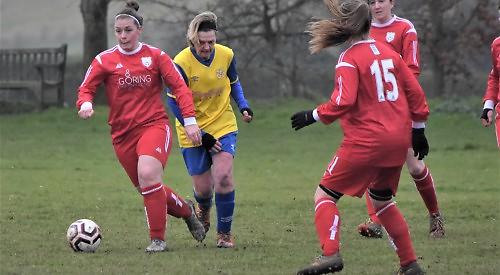 Back in the autumn visitors Stanford-in-the Vale Ladies won a close encounter 2-1 against Goring United Ladies, and the home side were determined to end their debut season on a high.

Goring took the game by the scruff of the neck from the first whistle and caused problems for the Stanford-in-the-Vale defence. Goring took a deserved lead after 19 minutes with Harriet Waller scoring from the edge of the box with a curling effort that eluded the keeper.

From the restart Goring were once again on the offensive scoring a second goal through Rachel Kernick with a good run to the back post to slot away for her first goal of the season.

Goring were very much the dominant team during the first half with the conditions worsening, but two late chances for Stanford -in-the-Vale brought the otherwise untroubled Goring keeper Tracey Wibberley into action pushing both efforts on to the post to give Goring a 2-0 lead at half-time.

The second half began with Stanford-in-the-Vale looking to get back into the game, which they did within two minutes of the restart, with an effort picked up from a Goring goal kick from 25 yards that was lobbed over the retreating keeper.

Goring regained their two-goal lead quickly when Waller scored her second of the game. Second half substitute Ali Hannigan scored her first ever goal which brought a huge cheer from the supporters.

Stanford-in-the-Vale replied with a run from deep which was neatly played and converted from close range. Goring once again replied quickly from the restart with a thunderous strike from Louise Axon into the roof of the net to end the league season as Goring United Ladies’ top scorer.

There was still time for Waller to complete her second hat-trick of the season when she scored from close range after weaving through the Stanford-in-the-Vale defence to finish neatly into the bottom corner.