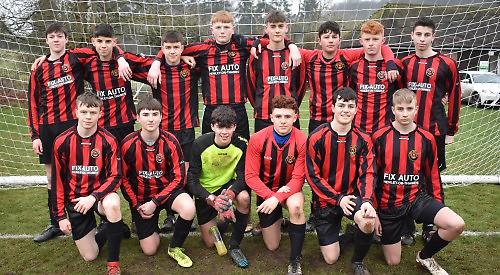 Within a minute of kick-off Joel Trinder opened the scoring but Ascot remained positive and the first half was end to end. Matty Krupa drew a reaction save from the Ascot keeper with a rising shot from inside the area. Trinder had the ball in the net twice more but both times he was in an off side position.

Tristan Flower, who had a fine game, and Casper Clark pushed the Henley team forward from central midfield with some good runs and passes whilst wingers Monty Heath with his pace and Eddie Handley showed good movement off the ball throughout as they stretched the Ascot team.

At the other end Ascot were finding space wide on their right and only a good save from Henley keeper Matthew Rylance denied Ascot when a break down their right resulted in a good cross shot that looked destined to go in at the far post. Henley’s started the second half with a midfield three of James Laing, who had his best game of the season to date, Sami Morgan and Conrad Gurney. These three got a grip of the game and Henley settled into a good attacking rhythm.

A through ball from Gurney put George Weller through the Ascot defence only for the visiting keeper to stand up well and deny a goal.

Soon after Weller closed down a clearance and rounded the keeper to finish into an empty net. Henley were playing with three at the back. Alfie Wylie, Cameron Smith and Dan Kernick, who were directing the play, switched the Henley attacks from right to left and back again.

With five minutes of the match remaining, an impressive play that started on the left, saw the ball moved across the back three, down the right to Handley who combined with Krupa before crossing to Trinder who scored to make it 3-0.

Henley weren’t finished and in the last minute a Weller shot was saved by the Ascot keeper, Trinder got his head to the rebound only for the keeper to save again, but Trinder was first to the second rebound and slotted the ball home for his hat-trick and Henley’s fourth goal.

Played on Ascot’s newly laid 3G pitch, the hosts took an early lead when they converted a corner. The Hurricanes were struggling to get a foothold in the game and they failed to clear their lines as Ascot broke down their left and their front line needed no second invitation to fire home their second goal of the game.

The Hurricanes were then given a lifeline back into the game as they were awarded a penalty only to see it go wide by a foot as they went into half-time trailing 2-0.

In the second half man-of-the-match Sam Winters led the charge. Tom Atkinson, playing in the number 10 role, sent striker Harvey Herbert away down the middle with a perfectly weighted ball. Herbert created room for himself in the Ascot box and unleashed an effort that the Ascot keeper had to tip round the post for a corner. Henry Mendelssohn flighted the corner into the heart of the Ascot penalty area and it was Winters who headed home to get the Hurricanes back in the game.

Mendelssohn again delivered an inch-perfect cross and it was centre back Olly Saunders who rammed his header home from five yards out to level the scores.

However, the Hurricanes were then undone by a corner as Ascot went back into the lead at 3-2.

Sam Robinson then set off on a run as he sidestepped and jinked past three Ascot defenders before having his fierce shot saved. He was the first to the rebound and made no mistake from close range as the visitors drew level.

Joe Turner was anchoring the midfield and he gave the Hurricanes the platform to go and get the winner which came from another corner and a melee in the opposition box. The ball seemed to strike an Ascot hand but before any appeals could go up Robinson was the first to react and he smashed the ball home to secure the three points.