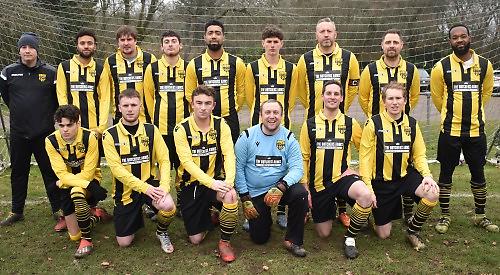 VISITING side WOODCOTE destroyed Premier Division basement team WOODLEY UNITED ROYALS with a devastating display of attacking football as they ran out 10-1 winners.

A 6-0 half-time score meant that the game was already won, but there was no let-up as a further four were added in the second period.

Jake Dillon helped himself to a double hat-trick, four of his goals coming in the first half, the best of which, a sublime chip from 20 yards, brought up his hat-trick after only 24 minutes.

Jake’s twin brother Frank was also highly influential providing four direct assists and stand-in player-manager, James Worsfold, led the line well and helped himself to a hat-trick. Josh Beisly, who was a bundle of energy in midfield, was the other goal-scorer, with a close-range finish.

In Division 1 ROTHERFIELD UNITED went down to a 3-1 home defeat against READING YMCA.

YMCA opened the scoring from a corner in the first half and doubled their lead from another corner as the ball was fired in from the edge of the box.

Rotherfield got back into the game after some good work from Karrl Clark found Aaron Attfield who bustled the defender and slotted past the keeper from a tight angle.

With 10 minutes of the match remaining YMCA made sure of the three points with the final goal of the match from a curling free kick in a game that saw Markland Tidswell named United’s man of the match.

Elsewhere in the division WOODCOTE RESERVES slipped to an 8-3 defeat against fellow strugglers, WESTWOOD WANDERERS, a result that saw the hosts slip to the foot of the table. Goals for Woodcote were scored by Zach Eastman and Daryl Potter.

GORING UNITED returned to the top of Division 3 with a facile 9-0 victory against a depleted TAPLOW UNITED DEVELOPMENT side. Goring dominated for the entire 90 minutes, with man-of-the-match James William’s solid display ensuring goalkeeper Tom Canning saw very little of the ball.

Goring opened the scoring after 20 minutes when Matt Hayden picked up a loose ball and picked his spot to easily beat the keeper from 28 yards. Shortly afterwards a long ball from Dave Woodley was crossed into the middle by Dean Robertson allowing Josh Monk to smash the ball home.

Monk turned provider giving George Scoffham the chance to slide home at the far post before a further effort from Monk and a header from Dan Houseman gave the visitors a 5-0 half-time lead.

The second half continued in the same vein, Robertson cooly slotted home before substitute Ben Fuller, who terrorised the home defence, added two further goals. Monk missed a good chance to complete his hat-trick but atoned in the 89th minute turning the ball home from a tight angle. In stoppage time Goring looked like they would add a 10th but Monk’s close range effort was touched over the bar from the last kick of the game. Elsewhere in the division hosts HAMBLEDEN picked up a point as they drew 1-1 with ROBERTSWOOD. In Division 4 HENLEY TOWN DEVELOPMENT triumphed 6-3 against PHOENIX OLD BOYS DEVELOPMENT at the Triangle Ground. Charlie Douglas scored a brace for Town while there were also goals for Jimmy Austin, Guy Brown and Nick Holzer.