York scores from 60 yards out as Town reach final 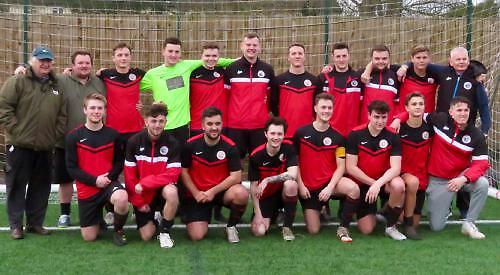 HENLEY TOWN progressed to the Sam Waters Cup final on Sunday after beating Catherine Wheel in the semi-final at the Oxford Academy.

Henley started the game well with some good attacks down both sides of the pitch. The good start was rewarded with an outstanding goal when Charlie York smashed in a free kick from over 60 yards out right into the top corner of the goal. Henley doubled their lead on the 20 minute mark when Charlie Douglas made a good solo run down the left side and squared the ball to Nico Cheesman who calmly slotted the ball home.

Catherine Wheel pulled a goal back when they headed home from a set piece on the 30 minute mark. Henley managed to score another goal right on the stroke of half-time when George Carder played a long ball over the top to Daniel Chalfont who finished calmly into the bottom corner.

Henley started the second half on the back foot and were pegged back early on when Catherine Wheel scored another header to make the score 3-2.

Henley were on the back foot for the next 20 minutes of the game and it was down to good defending from Dan York, Brendan Keane, Tom Essam and Sam Earl that kept the score at 3-2. Jack Earl and Dan Sykes continued to battle hard in the midfield and were good at breaking up play and setting Henley up for counter attacks.

Henley continued to defend well for the last 10 minutes of the game and managed to see out a barrage of corners and free kicks.

Henley Town will now face Barton United in the final at the end of the season.