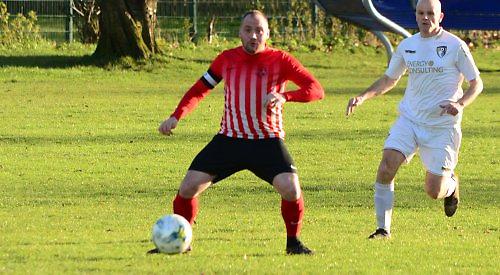 DIVISION 1 league leaders WARGRAVE progressed to the quarter-finals of the Senior Cup after running out 4-1 winners away at Premier Division side MORTIMER.

Wargrave started well and took an early lead through Joe Wigmore after a mistake from the Mortimer keeper.

Wigmore made it 2-0 with a close range finish before Mortimer pulled a goal back with a deflected effort from the edge of the box for 2-1. Wargrave went 3-1 up when Sam Wild smashed the ball in from inside the box just before half-time.

The second half was an even encounter with Wargrave adding one more goal to the scoreline when Stuart Moss converted a penalty.

Wargrave will host Premier Division Wraysbury Village in the next round of the competition.

HENLEY TOWN made it through to the quarter-finals of the Intermediate Cup after winning 6-4 away at Division 2 rivals DATCHET VILLAGE.

Seven minutes into the second half Daniel Chalfont outpaced a home defender to put Henley 6-2 up.

However, with a strong wind now behind the home side, the home side pulled two goals back to make it 6-4 and with time running out Alex Harris White had to leave the pitch injured for Henley. Division 3 league leaders GORING UNITED also progressed to the last eight of the competition after winning 4-3 at Division 2 strugglers WINDLESHAM UNITED RESERVES.

Goring, missing more than half their usual starting 11, began the game well with Ben Fuller and Josh Monk threatening on the counter-attack. After 10 minutes Monk outpaced a defender to reach the byline before cutting back and finishing with his left foot. The same player added a second when he turned his man before finishing with a low shot from the edge of the area.

Windlesham clawed their way back into the game but the Goring defence, well marshalled by James WIlliams who was ably assisted by debutant Charlie Dodd, Ed Ardill and George O’Brien stood firm.

A strong wind and bumpy pitch made the second half a scrappy affair, but Goring looked comfortable until the defence failed to deal with a swirling high ball that was eventually turned home from close range. Undeterred the hard working Matt Hayden fed Fuller who outpaced his man before confidently slotting home.

Substitute Tom Bonner scored Goring’s fourth when he held off a defender and finished from 20 yards over the head of the Windlesham keeper, before Monk missed an easy chance to score a second consecutive hat-trick when he attempted to lob the tall keeper from eight yards when he could have headed home a long Tom Canning kick.

With Oli Rayner working tirelessly in an unfamiliar defensive midfield position a comfortable victory seemed assured but two late penalties ensured a nervy final seven minutes. With Mike Holloway and Martin Greenwood being forced off with injuries a depleted side worked hard to deny the home team any clear chances.

HAMBLEDEN crashed out of the cup after losing 5-4 on penalties at home to ROBERTSWOOD after the match had finished 2-2 after extra time.

Henley Town will travel to Marlow United Reserves in the quarter-finals whilst Goring United will host Robertswood.