Tornados blown away by hosts 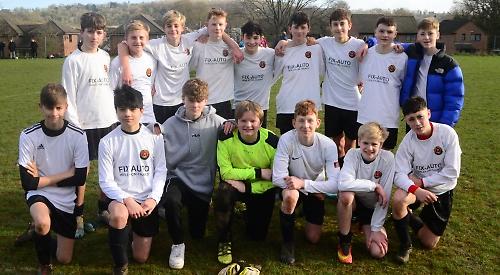 In the first half Westwood had the benefit of the conditions as Henley were pinned into their own half but the visitors’ defence of Cameron Smith, Dan Kernick and Alfie Wylie looked strong and quick.

Goalkeeper Matthew Rylance played confidently in the difficult conditions, yet the wind meant it was impossible for Henley to prevent Westwood from having chances on goal.

Profligate finishing and good defending and goalkeeping kept Westwood out, including a fine one-on-one save from Rylands followed by Smith anticipating the second shot and getting back on to the line to deflect it wide.

Sami Morgan and James Laing worked particularly hard in midfield and on the break Henley created chances for forwards Olly Deacon and Joel Trinder, however the Westwood keeper was equal to them both.

With the wind behind Henley in the second half it was the Westwood defence now under pressure as Eddie Handley and George Weller on the right were causing Westwood problems.

The opening goal came from the left with Tristan Flower breaking into the box and finishing through a crowded penalty area. Trinder then broke through the Westwood defence before squaring the ball for Deacon who made it 2-0 for Henley.

The visitors continued to create chances as Matty Krupa was having a fine match with his passing and dead ball delivery. A corner fell for Casper Clark whose diving header went just wide.

Flower then sent in a defence-splitting pass which Deacon finished but the strike was off-side. In the last minute there was a flowing move with the ball being moved from Weller on the right, through Deacon to Trinder who turned and drilled a low shot into the far corner to wrap up the scoring.

Henley found themselves 1-0 down after five minutes following a rebounded goal following a free kick into the box.

Ten minutes later Spencers Wood were awarded a penalty which they converted after the ball struck the inside of the post.

The Hurricanes were finding things tough and were not able to get their passing game going but just before half-time the home side got back into the game with a near post headed flick by Theo Lock from a Jackson Meredith corner.

In the second half the Hurricanes flew out of the blocks and immediately equalised when Roman Meredith finished after a low cross from the left.

Ten minutes later Luke Morgan cut in from the left and hit a right foot shot across the keeper into the far corner for the Hurricanes to take the lead for the first time in the match. The comeback was completed when Lock rounded off a man-of-the-match display by adding his second goal late in the game to make it 4-2.