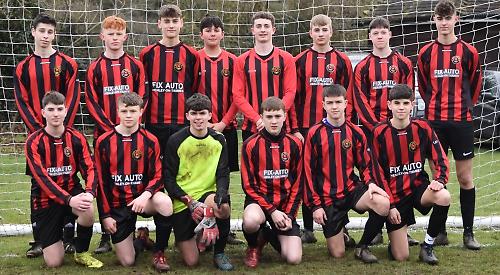 The visitors’ goalkeeper was the star of the match with some fine saves. In the first half he tipped around the post a goal-bound curling shot from Henley forward Olly Deacon, and he surpassed this in the second half with a point blank reaction save from Henley’s Freddie Mendelssohn.

The first half was dominated by Henley’s attacking play. Casper Clark pulled the strings in midfield as Henley passed the ball around STBG.

During a controlled passage of play Sami Morgan received the ball on the edge of the area, created space for a shot and fired the ball into the bottom left hand corner of the goal. Henley then collectively switched off for a few minutes and allowed STBG to equalise shortly afterwards with a shot from a corner.

Cameron Smith looked creative on the left of a back three, pushing forward and overlapping with Izak Dickason to set up a chance for Joel Trinder. The highly effective Matty Krupa put a shot just wide.

George Weller performed well, drifting in from the left while Trinder’s pace caused STBG plenty of problems but Henley could not find the finish their approach play promised to deliver.

STBG took the game to Henley more in the second half but with Alfie Wylie’s pace and calmness at the back Henley rarely looked in trouble defensively.

Goalkeeper Matthew Rylance displayed good handling as he collected a high awkward ball just under his bar whilst under pressure from the STBG forwards. However, on a STBG break forward there was little Rylance could do to prevent Henley from falling behind, saving the first shot before the visitors took the lead by tucking away the rebound.

Henley pushed for the equaliser with Tristan Flower with another fine performance in midfield driving the team forward. Eddie Handley was just wide with a cross shot from the right while a spectacular Mendelssohn overhead kick flew past the post.

STBG players were blocking Henley’s shots and their defence stood firm. Conrad Gurney combined in midfield with Clark and Krupa but Henley could not find space to create clear chances.

Finally Henley got the breakthrough, although the STBG goalkeeper was again immense, saving two close range shots in quick succession before Deacon looped the second rebound over and into the goal. As Henley pushed for a winner in the last 10 minutes the game opened up and became end to end. Smith hit a shot on the turn only to see another great save from the keeper. Dickason, Wylie and Smith ensured Rylance’s goal was protected but despite concerted attacking play with Handley and Trinder putting in a series of crosses Henley could not find a winning goal.

AFC HENLEY HURRICANES U13s were unfortunate not take all three points as they were held to a 1-1 draw at BRACKNELL CAVALIERS U13s.

The visitors started the game well and it was man-of-the-match Ethan Holliday who went close to opening the scoring when he made a run, cutting in from the left and hit a shot that smacked against the underside of the bar and appeared to cross
the line but the referee waved play on.

At the other end of the pitch captain Tom Yeoman was marshalling the back line well as the hosts were reduced to taking long range shots. Olly Saunders was Yeoman’s centre back partner and he too was key in keeping a clean sheet in the first half. The back line were aided by the defensive work of central midfielder Joe Turner who made a number of tough tackles and key interceptions to keep the opposition at bay.

It was left to Harvey Herbert to open the scoring for the Hurricanes as he burst onto a good through ball by Henry Mendelssohn. Herbert drove into the Bracknell penalty area to score despite the keeper getting a hand to the ball.

In the second half Matthew Dippenaar came to the rescue for the visitors making a goal line clearance before making a key tackle deep inside his own penalty area while Ben Horner in the away goal had little to do although he did have to tip a fierce shot around the corner.

More controversy was to follow as Herbert hit another shot goalwards that the keeper got a hand to but once again the referee ruled that the ball had not crossed the line.

Joe Winpenny combined well with Sam Robinson down the left and Robinson was unlucky not to score with a good shot that drew a fine save from the Bracknell keeper.

Morgen Wynn-Jones, returning from injury, was a constant threat to the opposition as he combined well with Tom Atkinson to set him up for a chance that took a good block to deny the Hurricanes a second goal.

Bracknell scored the equaliser with a rare attack that resulted in a shot that Horner could do nothing about.

The match then degenerated into a physical affair but the Hurricanes dug in to secure a point.

The match was played at a frenetic pace and after a few early scares Henley settled and took control of the game and took the lead after a nice spell of play which culminated in a coolly taken finish by Lillie-Maye Clark.

The first half was end-to-end stuff and the Merlins did well to thwart attack after attack from the energised Henley team, similarly Jenson Lea was solid in goal aided by a resolute defence of Max Messias, Daniel Lennon, Mikey Dowling and Will Tebbutt who played well for the entire 70 minutes.

Flavio Merennage, partnered up-front with Clark, came closest to a second with a long-range shot that sailed just past the far post, but after another quick counter-attack and some smooth passing, Raphael Baber’s shot into the top right corner just before half-time looked to have knocked the wind from the Merlins’ sails.

The Merlins came out strong in the second half and a few Harriers changes with Clark now in goal and Lea upfront unsettled the home team who were under the cosh for 20 minutes, but after the Merlins pulled a goal back the Harriers dug deep with some good keeping by Clark, man-of-the-match Harry Floyd unbeatable on the left side of the pitch, Charlie Hughes and Baber strong in the Midfield, and Tebbutt and Dowling rock solid at the back, the Merlin’s were pushed back time and time again.

The Harriers weathered the storm and re-took control of the game and the last 10 minutes saw them come close to putting it out of reach with multiple attacks but the Merlins goalkeeper pulled off several good saves after shots by Lea and Merennage. Dowling almost capped a fine performance but his shot beat the keeper only to hit the outside of the post.