Ramsay and Hayden on target as league leaders march on 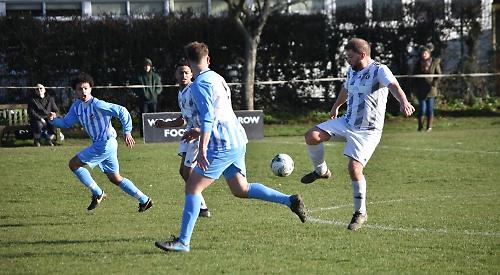 FOLLOWING three successive wins WOODCOTE were left disappointed last Saturday as they went down 3-0 at home to FINCHAMPSTEAD in their Premier Division clash.

The visitors took the lead inside the first 10 minutes when a good cross was headed home. Woodcote failed to produce a shot of any description in the first half.

Early in the second half Jake Dillon did get a shot on target but it was well saved, but on the hour mark the visitors doubled their lead. The defence failed to deal with a through ball and goalkeeper, Ben Lallament was adjudged to have brought a forward down in the one-on-one which followed. The penalty was converted for 2-0.

On 75 minutes Finchampstead increased their lead when, from a long-range shot, a big deflection left Lallament powerless to keep it out. In the last 15 minutes Woodcote’s Josh Beisly had a shot well saved as did top scorer, Jake Dillon.

HAMBLEDEN slipped to second from bottom in Division 3 after going down 1-0 at home to BERKS COUNTY RESERVES.

Division 4 league leaders GORING UNITED RESERVES ran out 2-0 winners away at HARCHESTER HAWKS DEVELOPMENT. John Ramsay and Matt Hayden were on target for the visitors.

Elsewhere in the division HENLEY TOWN DEVELOPMENT went down to a 4-3 defeat at home against TAPLOW UNITED VETS. Cristiano Augusto and Guy Brown were amongst the scorers for the hosts.