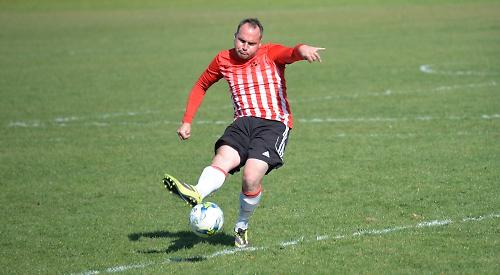 WARGRAVE secured their place in the Berks and Bucks Intermediate Cup final after running out 2-1 winners at Aylesbury Dynamos last Saturday.

Wargrave had the wind behind them in the first 45 minutes and the majority of the half was spent in Aylesbury’s half apart from the rare counter-attack from the hosts.

Wargrave started creating chances when they got to grips with the conditions with Sam Wild coming close a few times before Dan Patterson hit a shot from 30 yards out that flew into the top corner to put the visitors 1-0 up.

Both teams created chances after this as Aylesbury had a goal disallowed for offside with half an hour to play and also created several other chances on the counter-attack.

Wargrave could have wrapped the game up on several occasions with the dangerous front three of Sam Wild, Stuart Moss and Joseph Danelian always looking to create chances before Aylesbury made it 2-1 on a counter attack with 10 minutes to go.

Wargrave’s centre backs Tom Bray, who was man-of-the-match, and Torben Rees dealt with the attacks well along with fullbacks Jack Wild, Callum Alliston and James Pople.

George Hepburn controlled much of the second half in midfield along with Bradley Reaiche and Dan Patterson and late substitute Michael Few as they always made it hard for Aylesbury to play and looked to move Wargrave forward when in possession despite the horrible conditions. Goalkeeper Ben Carter was solid throughout.

Wargrave will face the winners of the other semi-final between Iver Heath and Newport Pagnell Town Reserves in the final on April 4.