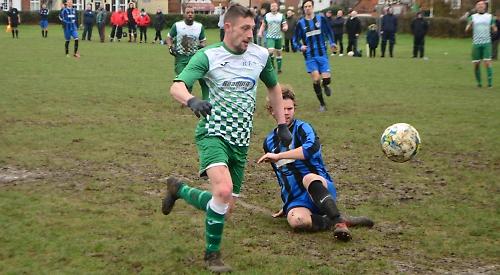 EMMER GREEN’S run in the Berks and Bucks Sunday Intermediate Cup came to an end in difficult conditions after a penalty shoot-out loss to MAGPIES 91.

Emmer Green started the better side and had many chances in the first half. Jordan Lovelock picked up the ball just inside his own half and after rolling the Magpies defender drove into the penalty area and produced a great finish to put Emmer Green 1-0 up.

The home side had the chance to double their lead when they were awarded a penalty but the Magpies’ keeper produced a fine save from Dan Donegan’s penalty.

After the break Magpies played with more confidence but Emmer Green had the upper hand and more chances which they were failing to convert.

Magpies struck back after the ball landed fortunately at the striker’s feet who stuck it under the goalkeeper. Magpies were reduced to 10 men after Lorenzo Medford was brought down when through on goal but even with the extra man Emmer Green couldn’t put the game to bed in the 90 minutes.

The game ended 1-1 and two missed penalties in the shoot-out meant Emmer Green missed out on the final, losing 5-4 on penalties.

EMMER GREEN RESERVES missed out on the final of the Reading and District League Industrial Cup and Shield after losing their semi-final 2-1 against PARK VILLA.

Emmer Green fell behind early when a free kick was headed on to the bar but luck was on Park Villa’s side when it fell to their player to tap in. With the help of the wind Villa scored directly from a corner to give them a 2-0 cushion at half-time. Emmer Green came out strong in the second half and started throwing everything at Villa Park as they piled on the pressure. Emmer Green’s reward came soon after when Nathan Bovell slotted home calmly to set up an interesting end to the game.

Despite Emmer Green’s efforts Park Villa managed to hang on to secure their place in the final.