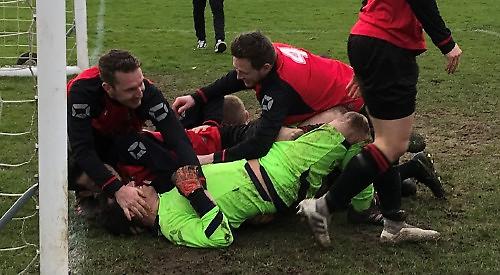 WATLINGTON TOWN progressed to the semi-finals of the Oxford Charity Cup in extraordinary circumstances last Saturday.

The match, which was originally scheduled to be played at Hailey, was switched to Watlington so the fixture could go ahead.

With both teams drawing the match 3-3 after full time and extra time the tie went to a penalty shoot-out which consisted 42 spot kicks with the hosts winning 19-18.

In windy conditions Town started brightly playing with the wind at their back and were applying early pressure and took the lead when Jake Braim bagged his first of the game with a fine finish assisted by Kevin Hudson.

Hailey then took control of the game and scored two goals due to Watlington defensive errors.

The visitors had their tails up as they began to win the first and second balls and they extended their lead to 3-1 just before half-time.

Early in the second half Braim scored his second of the game following in on Darren Outten’s effort that came back off the post to make it 2-3. The tie had now switched in Watlington’s favour and an inswinging ball from Alex B’Layachi was met by Jon Little who headed home to level the scores.

Hailey were reduced to 10 men after a visiting player picked up his second yellow card of the game. Watlington took control of the game and could have taken the lead with three chances being cleared off the line whilst another chance rattled the crossbar.

With the scores level the match went into extra time but neither side could find a breakthrough so the tie went to a penalty shoot-out.

Watlington were first to start the penalty shoot-out, scoring their first two. Hailey missed their second penalty (Selwood save), leaving it 2-1 to Watlington after two penalties each. Watlington then missed their third penalty (over the bar), while Hailey scored theirs to make it 2-2 from six spot kicks.

Both sides then proceeded to score all their penalties until the 14th spot kick when Watlington missed theirs and it looked like Hailey would progress, only for Selwood to make a save high to his left to keep Town in it. It then went to 18-18 and Watlington scored their next one, but Hailey’s was saved by Selwood, sparking celebrations from the Watlington players.

Watlington Town will now play Marston Saints at home in the semi-final.