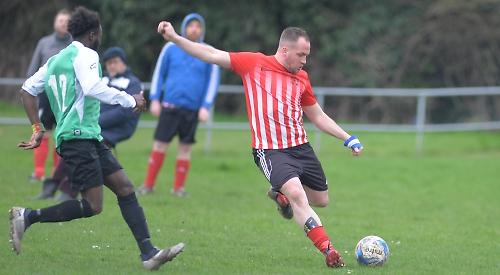 THREE second half goals, the winner coming in time added on, spared WOODCOTE’S blushes against bottom of the Premier Division table side WOODLEY, who lost 10-1 in the previous encounter.

A poor first-half performance by the home side saw the visitors 2-0 ahead at the interval. In an improved second half, though still a long way short of their best, the gap was narrowed by a Jake Dillon header.

In injury time, Woodley hearts were broken as a dangerous Frank Dillon free kick was flicked on by James Worsfold and, after bouncing off the keeper, fell invitingly for Sam Green to rifle home to secure all three points and send Woodcote into fourth place in the table.

The game started evenly but Wargrave had more of a cutting edge in attack. Joe Wigmore opened the scoring with a fine solo goal, running from far out, dribbling through several defenders before scoring past the keeper.

Wigmore then assisted Stuart Moss for 2-0 before Moss made it 3-0 from long range with his second. Wigmore also scored his second before half-time for a 4-0 lead at the break. In the second half Wargrave sat back as Eldon enjoyed more possession but the hosts always looked dangerous on the counter-attack. Callum Alliston made it 5-0 late on before Moss completed his hat-trick from a free stoppage time.

On a bumpy surface neither team were able to impose themselves in the windy conditions. Taplow threatened on a couple of occasions but home goalkeeper Tom Canning was quickly out to block the danger. After 25 minutes Taplow took the lead when Goring lost possession at the back giving a clear run on goal which was easily finished.

Goring were grateful to George O’Brien for a good block when defensive hesitation presented Taplow with an open goal. After 43 minutes parity was restored when good work from Harry Voice on the right set up Ben Fuller who stroked the ball home.

Goring started the second half in the ascendancy and were duly rewarded when Voice held off a defender before placing a low shot beyond the keeper. The lead didn’t last long as Taplow were awarded a penalty. After a switch to 4-4-2 substitutes Dean Robertson and Dan Houseman combined to give Goring the lead when Houseman powered home a header from a pinpoint corner.

In a tense final 15 minutes Taplow came close when Canning was adjudged to have picked up a highly dubious back pass, however he did well to claw away the subsequent free kick.

In Division 4 HENLEY TOWN DEVELOPMENT went down to a 3-0 defeat at BERKS COUNTY ROVERS.