Six of the best for Green maintains their unbeaten record 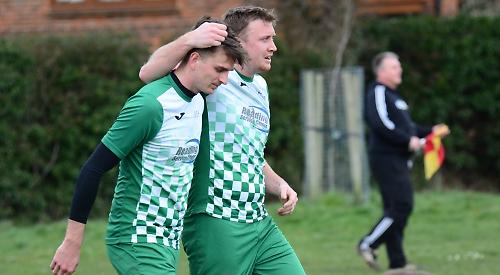 EMMER GREEN made it 10 wins from 10 games as they dispatched WOODLEY WANDERERS RESERVES 6-1 in the Senior Division.

The hosts were not at their best in the first half but still controlled the game. They forged a couple of early chances but were kept at bay by Woodley’s goalkeeper.

Then, on the half-hour mark, Green’s Kenny Evans took a quick free kick. He played in Luke Donegan, who cut the ball back for Jordan Lovelock to hit first time and he finished nicely on his weaker foot.

Wanderers hit back and were on level terms just before the break after a long ball into the box bounced off the post and was bundled over the line.

After a few strong words at half-time, Green rallied. Lorenzo Medford laid the ball into Daniel Donegan for him to smash it past the goalkeeper to go in front again.

Donegan was in the mix for the next goal, squaring a free kick to his brother Luke Donegan for him to shoot from 18 yards out to make it 3-1.

Green’s fourth came soon after when a corner from Medford found Kaser Chowdhary, who headed home his first goal for the club.

Medford made it five and Ashley Searle completed the rout with another assist from Medford.

Another positive from the match saw Green’s Craig Fitzpatrick take to the field after 18 months out through injury.

In the Premier Division, HENLEY TOWN suffered a heavy 5-2 defeat at the hands of ENGLEFIELD.

Henley struggled to find their groove at the North Street playing fields and the hosts got off to the perfect start just 10 minutes in as they fired from range to open the scoring.

After 20 minutes, Henley dragged themselves back into contention and began to look menacing at set-pieces.

Eventually, their pressure told as Hugh Barklem reacted quickest to a loose ball to bury the ball home in a crowded penalty area.

After the break, Henley started brightly but, as they pushed to level the score, they were once again were caught out, conceding to make it 3-1.

In the 70th minute Harri Douglas calmly finished a well-delivered cross from Charlie Douglas but another two goals in quick succession from Englefield ended all hope of a comeback.