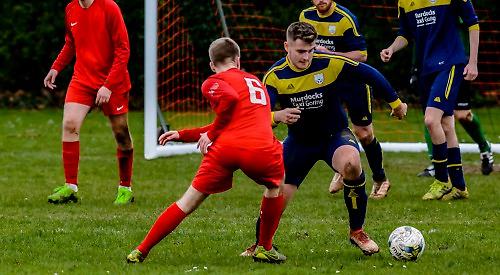 A RED card for Ryan Richardson in the 87th minute gifted READING YMCA victory against ROTHERFIELD UNITED in Division 1 on Saturday.

The resulting free kick was scrappy but it was knocked in by Charlie Cook to give the hosts the edge in what was a tight match.

Richardson saw red after a slip brought a two-footed tackle on a Reading player.

Back-to-back clean sheets for the Young Men keep them in third place in the league on goal difference.

After a tight first period in which there were few chances, Woodcote should have taken the lead in the second half when Justin Trow hit the side netting with the goalkeeper miles out of his goal.

Slough broke the deadlock within the last 10 minutes when the ball was deflected in.

In Division 3, HAMBLEDEN and PHOENIX OLD BOYS RESERVES played out a 1-1 draw.

Both teams felt they could have done more to claim the three points, having missed chances. Martin Power was Hambleden’s goal hero, who scored a powerful header.

The hosts started the brighter of the two teams and were looking dangerous down the wings with Martin Greenwood’s pace and Ollie Pluck’s delivery causing Farnham problems.

Eventually the pressure told and Hewitt calmly slotted the ball home after he found himself through on goal. The rest of the first half was even but Goring just about edged it.

After the restart, the visitors enjoyed much more of the ball. Then, following a failed clearance, Farnham equalised with a fierce shot from just inside the area.

Farnham continued to pile on the pressure, but Ellington and captain Jack Read-Wilson stood firm at the heart of the Goring defence.

Goalkeeper Matt Trimmings also made a couple of fine saves, tipping one on to the post to keep the scores level. Goring continued to battle hard and started creating some more attacks of their own searching for the winner.

Then, following a tactical switch, Dan Carter was moved out to the right-hand side, where he delivered a pinpoint cross for Ellington to bundle home.

The Goring players put their bodies on the line for the last few minutes of the match and were relieved to hear the final whistle.

A vital three points for Goring which keeps them at the top of the league.