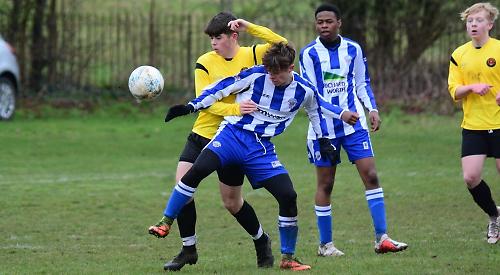 AFC HENLEY HURRICANES U18 ran out 4-1 winners against 10-man ASHRIDGE PARK at Harpsden on Saturday.

The visitors started a man down from the off but even with a numerical advantage, the Hurricanes struggled to penetrate the defence.

Ed Lawrence went closest for the hosts with a rising shot from a corner kick but Ashridge continued to make life hard for the Hurricanes.

Felix Grant broke the deadlock when he picked up the ball outside the box and thumped a curling drive into the left corner.

But the lead didn’t last long. Ashridge’s number nine caught Henley on the break with his pace and he finished with power and precision.

The Hurricanes took control of the second half as Ashridge started to run out of steam.

Jake Jones, who received the man-of-the-match award, put the hosts back in front.

From then on the Hurricane’s lead never looked in doubt. Jamie Hudson, Sam Clark and Lucas Pestana began to control the game from the middle of the park and the defence of Lawrence, Felix Butterworth, Alec Strickson, Charlie Wagstaff and Ethan Pearce brought composure at the back.

On the few occasions the visitors broke through, goalkeeper Jem McAllister showed his full repertoire of ball skills to extinguish any danger.

Top scorer Christian Oswald continued his rich vein of form, netting a third for Henley and Sonny Martin finished off the scoring from close range to net his first goal of the season.

The hosts started brightly and took the lead when Tom Atkinson played an inch-perfect cross along the six-yard box to give Harvey Herbert the easiest of tap-ins.

Joe Winpenny was having the game of his life in defence as his launched clearances caused mayhem in the NPL back line.

Captain Olly Saunders had to be at his sharpest to come across and make a crucial interception to keep the hosts advantage in tack.

He was ably assisted by Luca Thomson whose heading and strength in the tackle was key to giving the Hurricanes the platform to get on the front foot.

This allowed Henley to go and get the second as Morgen Wynn-Jones flicked a through ball to Henry Mendelssohn who only needed one look to see the keeper off his line and deliver an exquisite chip over him to make it 2-0.

Joe Turner, who was anchoring the midfield, then sent Mendelssohn through for his second when he again chipped the keeper.

Tom Yeoman, who received the man-of-the-match award, then played in Harvey Herbert from the right, who skipped past the keeper to finish to make it 4-0 at the break.

Sam Robinson started the second half well and he forced a corner for the Hurricanes. Atkinson took it and saw it drop in at the far post to give the Hurricanes a 5-0 lead.

Fullbacks Tom Bonser and Henry Steel were marshalling the NPL wingers with ease while Ben Horner had little to do in goal.

Finnbar Scott then switched from centre back to centre forward and he was unlucky not to add to the Hurricanes’ scoreline while Ethan Holliday hit a shot just wide.

NPL did score a consolation goal late in the game but it finished 5-1. The Hurricanes now play Bracknell in the semi-final.

AFC HENLEY HARRIERS U10 won a penalty shoot-out after a thrilling 1-1 draw with WINDSOR YOUTH DYNAMOS to progress to the semi-final of the East Berks Shield.

In the first few minutes, Charlie Nelmes rattled the crossbar while Raiph Surplice and Elysia Chilvers remained resolute in defence, forcing the Windsor players wide and the ball out of play or upfield.

Sam Irving just missing out, hitting strong shots into the side netting and across the face of goal. Raphie Barron then forced a good save from the Windsor goalkeeper and Oscar Sheppard drove a free kick in the direction of goal, only denied by a defensive clearance.

The Harriers dominated but strong defending from Windsor kept the game all square until the third quarter.

Josh Nicholson passed to Nelmes and Sheppard powered a shot towards goal. The keeper saved it but Henry Baker swooped on the rebound to score.

Defender Max Mollison then received a nasty knock in a defensive tackle, taking him out of the game.

Going into the final quarter, a quick break from Windsor resulted in a fine equaliser and the remainder of the match was played with the Harriers searching for the second goal. A great corner from Sheppard reached Baker, who struck it well with his first touch, but he sent it just wide, meaning the game went to penalties.

Windsor took the first penalty but it was sent over the crossbar.

Barron stepped up for the Harriers, who slotted his penalty into the bottom right of the goal.

The visitors got on the score sheet with their third before Sheppard’s strong shot hit the the right post and bounced out.

The fourth penalty taker for Windsor sent their shot wide and Baker struck an unstoppable shot to make it 3-1.

• The shield semi-final will be played at Jubilee Park next Saturday (March 21).