Weller is the hat-trick hero for five-star Hurricanes 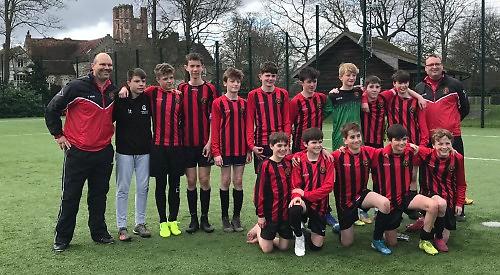 Striker Harvey Herbert was combining well with Henry Mendelsshon in the early stages of the game and it was this combination that put Henley into an early lead. Mendelsshon clipped a perfectly weighted through ball for Herbert to run on to and he made no mistake from 10 yards out as he planted the ball past the keeper to make it 1-0.

Captain Oliver Saunders was marshalling the back line with efficiency while Joe Winpenny made a number of key interceptions and clearances to keep the lead intact.

Sam Winters, playing in the centre of midfield, quickly doubled the lead for the Hurricanes as he picked up a loose ball in midfield and beat a Bracknell defender before calmly slotting the ball past the keeper to make it 2-0.

Tom Atkinson was causing havoc down the right wing and his quick feet and intelligent passing set up further Hurricane attacks.

Finnbar Scott was showing his versatility as he was playing in an unfamiliar role at centre back and not only was his defending good but he also helped to set up the third goal. Scott took a long goal kick that found its way through to Herbert who took the ball in his stride and glided round the Bracknell keeper only to be brought down by the keeper when he looked certain to score. Herbert scored from the penalty spot to make it 3-0 just before half time. Bracknell came roaring back at the start of the second half as the Hurricanes were put under sustained pressure and it took a brave dive by Henley keeper Ben Horner at the feet of an onrushing Bracknell attacker to stop a certain goal.

Tom Bonser was at his best in the right back while an injury to Winpenny meant that Ethan Holliday had to slot in at an unfamiliar left back role.

The fullbacks were unable to stop Bracknell getting a goal back as a well struck half volley left Horner with no chance as the Hurricanes advantage was reduced to a two goal lead.

With their backs to the wall midfielder Joe Turner commanded the area in front of the back four with authority and helped the Hurricanes wrestle back control of the match. Tom Yeoman was also pivotal in shoring up the Henley defence.

As Bracknell pushed forward it meant that gaps appeared at the back and the Hurricanes were able to exploit this and put the game to bed.

Herbert made a good run down the right and waltzed past two Bracknell defenders before reaching the goal line. He cut the ball back to Sam Robinson who had made a penetrating run into the heart of the opposition penalty area. Robinson took one assured touch before blasting the ball into the back of the net.

The first half was end to end as an early flowing move on the right by Henley saw Izak Dickason, Alfie Wylie and Tristan Flower combining to send Eddie Handley away down the right wing. Handley crossed, George Weller found space and shot just wide.

Burghfield settled into the game and Henley were asked to defend as Cameron Smith and Alfie Wylie needed to be on their toes. Burghfield were pushing forward down their right forcing James Laing to drop back from midfield and demonstrate some strong defending. When Burghfield did get a sight of goal they found Henley keeper Matthew Rylance to be in good form.

For the last 10 minutes of the first half Henley started to take control with the pace of Monty Heath on the left and Handley on the right causing Burghfield problems.

Matt Krupa was pulling the strings in midfield and in the last minute of the half a cross from the right found Weller in the box who had plenty to do before finishing into the far corner of the net.

At the start of the second half Henley were pushed back and the defence stood firm. Then, with a swift counter attack Casper Clark released Heath down the left. Heath drove forward, pulled the ball back to Joel Trinder who rocketed a low shot into the bottom corner from the edge of the area.

Henley then took control of the match. Trinder and Clark combined in midfield to set up several attacks. Freddie Mendelssohn on the right wing was stretching the Burghfield defence.

A Henley attack on the left found Weller in the area who was brought down for a penalty. Weller dusted himself down and drilled the penalty firmly into the net.

With four minutes left Weller got his hat-trick finishing from just inside the area. In the final minute another Mendelssohn and Handley combination on the right set Mendelssohn away who crossed from the by-line for an in rushing Sami Morgan to make it five to Henley.