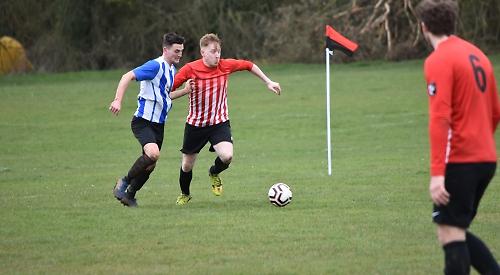 HENLEY TOWN ran out 2-0 winners away at Premier Division basement side AFC CAVERSHAM on Sunday.

Within the first few seconds Henley almost gained the lead when a Rowan Stacey cross almost caught out the Caversham goalkeeper but he recovered well to tip the ball onto his crossbar.

Henley created many opportunities but were denied by a stubborn Caversham defence.

Just before half time Caversham had their best chance of the game when a long range free-kick clipped the top of the bar.

In the second half Henley again came forward and this time opened the scoring when a neat through ball by Stacey released Hugh Barklem and he made no mistake in beating the goalkeeper.

Henley doubled their lead shortly after when a long ball over the top released Barklem who managed to win a penalty. Dan Sykes cooly slotted the ball into the bottom right corner to give Henley a 2-0 lead.

The visitors managed to see out the rest of the game and claim the three points and keep their first clean sheet of the season .

EMMER GREEN will play at the Madejski Stadium in the Tilehurst Charity Cup final after beating a hardworking TILEHURST YM team 5-4 on penalties in the semi-final last Sunday. The first half was a cagey affair with both teams trying to work their way into the contest. Both sides had chances with both sets of goalkeepers making smart saves, including the pick of the bunch from Phil Brown down to his left hand side.

Emmer Green got the breakthrough on the 45-minute mark when Jordan Lovelock poked towards goal from inside the penalty area. The ball rolled across the penalty area and into the bottom left corner.

Emmer Green started the second half in a more positive fashion and had numerous chances to win the game in normal time with a handful of set pieces being cleared from the Tilehurst six yard box and also working into good positions with the final ball just lacking.

As the wind picked up in the second half Tilehurst drew level with a long ball which evaded the Emmer Green defence and was tucked home for 1-1.

Both sides had chances towards the end of the game but neither failed to covert so it was straight to penalties to decide.

This was Emmer Green’s second penalty shoot out of the season having lost out in the Berks & Bucks semi final. This time Kaser Chowdhary, Ashley Searle, Matthew Drake, Daniel Donegan and Shane Maskell all scored from the spot while Emmer Green keeper Phil Brown saved Tilehurst YM’s second penalty to give his side a 5-4 win.

Emmer Green are now scheduled to play Burghfield in the final on May 19.