Wild wraps up scoring as league leaders march on 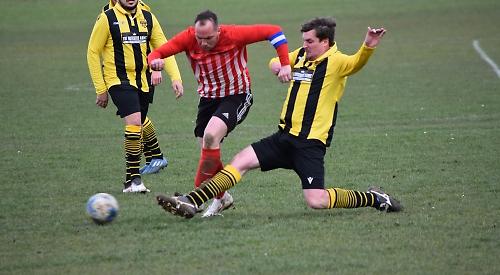 WOODOTE’S scheduled Premier Division clash with NEWBURY last Saturday was called-off on the previous evening as the visitors had insufficient available players.

In Division 1 league leaders WARGRAVE ran out 3-1 winners at home to ROTHERFIELD UNITED.

Both teams passed the ball well in a tightly contested and well-fought encounter as Wargrave took control midway through the first half with two goals in quick succession through a Stuart Moss header and a strike by Joseph Danelian.

Rotherfield replied almost immediately as stand-in skipper Aaron Attfield pulled one back, after Liam Bowbrick’s long-throw had bounced off the base of the near post.

Wargrave captain Moss was sin-binned soon after giving further momentum to Rotherfield as they dominated play at the start of the second half.

The visitors played some good football as they took the game to the league leaders, and came close to an equaliser when Karrl Clark fired over at the end of a good passing move.

Attfield and the impressive Jake Bateman also spurned good chances for the away side, as Wargrave weathered the storm and continued to threaten on the break.

United goalkeeper Grant Wildish thwarted the home team on a couple of occasions to keep his side in the match. Wargrave finally secured the points five minutes from time when their danger man Sam Wild ran through and fired home to make it 3-1.

Elsewhere in the division basement side WOODCOTE RESERVES secured a much needed win as they triumphed 3-1 at HURST.

Goals by Tommy Brownlow, Jake Dillon and Pedro Monteiro brought about the win but the visitors remain rooted to the bottom of the table.

Jonny Openshaw netted a hat-trick for the visitors while an own goal and a strike by Jack Holloran completed the scoring for the villagers.