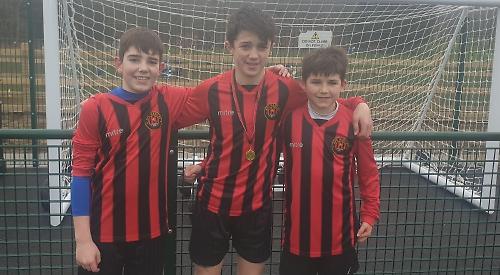 THE AFC Henley Hurricanes U13s held their end-of-season presentation evening online due to the coronavirus pandemic.

Players and their parents tuned into the side’s WhatsApp group where the coaches James Atkinson and Mike Turner posted video clips of this season’s performances as well as revealing the award winners.

The highlight of the annual event, which is usually held at the town hall, came when two-time Premier League winner Joleon Lescott appeared via a video message.

The retired England and former Everton and Manchester City defender congratulated the team on their season and announced that the Hurricanes were the joint winners of the East Berks Football Alliance Cup.

They shared the trophy with Maidenhead with the final unable to be played due to the covid-19 restrictions which have meant all football in the UK is cancelled until further notice.

Due to private school commitments the shape of the team will look quite different at the start of next season, scheduled to start in September, so the achievements of each player was highlighted.

The top scorer of the season award went to Harvey Herbert, who scored 13 goals. His one-on-one finishing in particular was a highlight. His goals were key to the team reaching the cup final and also in helping the team to reach mid-table in the league before the season ended with about five games remaining.

Sam Winters and Sam Robinson were in joint second place with each notching up eight goals.

Joe Winpenny, who played in both defence and midfield this season, was named thje most improved player. His tackling was tough and the distances he got on his clearances were a real help to put the Hurricanes on the front foot in games.

Running Winpenny close were Matthew Dippenaar, who had a great first season with the side, Morgen Wynn-Jones, who was playing a year above his age group, and Oli Saunders, who grew into the role as captain during the season. The player of the season award went to Harvey Herbert, whose forward play was essential to the success of the team.

He showed he could play both with his back to goal and with the ball played through the opposition defence, where he was able to use his electric turn of pace to good use.

Also under consideration were Sam Winters, whose dynamic play in midfield was key to the team’s overall performances, and striker Henry Mendelssohn, who was signed in the January transfer window and made an immediate impact.

Atkinson says his team got better as the season went on.

“Christmas was a real turning point for the players,” he said. “We then won a few cup games and it is really true when league managers say a cup run does wonders for players’ belief and momentum.

“It was a shame that we could not play in the final but to be crowned joint winners is a great achievement.”

Atkinson said that fellow coach Turner, a former professional footballer with Barnsley, was able to get in touch with Lescott, who works with loanees at the reigning Premier League champions, who agreed to send a video announcing the player awards.

“Joleon was particularly kind to Joe Winpenny because, like him, he is a defender, and the boys loved it, particularly as we have a couple of City supporters and an Everton fan. At the very end we ran a highlights real of clips of the players this season with each one getting a bit of air time, which I think was really appreciated by everybody.”

The coaches also edited clips from press conferences of Premier League managers to give the impression they were responding to questions about their players.

Herbert said: “It was a great night, made even better by being mentioned by our coaches and Joleon Lescott. I loved the unexpected appearances and comments from the Premier League managers. I’m very thankful for the acknowledgement and can’t wait to play again next season. Come on Henley!”

Joe said: “Receiving the most improved player award was a huge surprise. I was so happy and then being mentioned by Joleon Lescott was amazing — it was brilliant of him to take the time to get involved. It was a brilliant evening.”