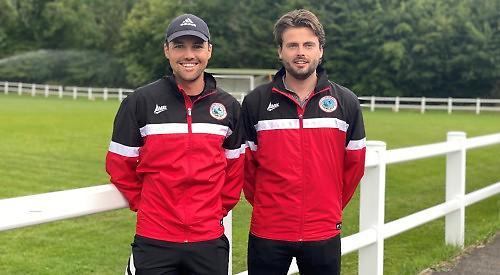 THE new manager of Henley Town Football Club has pledged to give youth a chance when the new season gets under way.

Tom Guy replaces Paul Trimmings, who left the club after the season was halted due to the coronavirus pandemic.

Guy has coached players at all levels from youth to men’s football and was appointed head of football at The Henley College in January.

The 30-year-old was previously an assistant coach to the first-team at Eastleigh FC, which plays in the National League.

He was also the club’s scholarship manager and led its under-17s side to a league title.

Guy was on the lookout for a new club once he took a job at the college as he wanted to provide a pathway for youngsters to get into men’s football.

He also brought with him Jack Woodley as his assistant, with whom he also works at the college.

Guy said: “I moved to the area in January after moving from Eastleigh Football Club where I was full time.

“At Eastleigh I learnt the benefits of having a pathway for younger players and getting them into men’s football at any level because it will help them develop.”

Henley, nicknamed the Red Kites, plays in the Thames Valley League along with its development (reserves) side.

The club, the oldest in Oxfordshire, pulled out of the Hellenic League in 2017 because it put too much of a strain on its finances.

Guy says that Henley is a “sleeping giant” and that he wanted to give the club stability on the field now that it is back in the black.

He said: “When I first came to the area I was told that Henley had been struggling for a few years and that it had better facilities than the standard that it was currently playing at.

“Henley was described to me as something of a sleeping giant and it was definitely an interesting project that I wanted to look at and take on.

“They have a clubhouse and a good pitch and so should be an attractive proposition for players to come and play for the first team.

“It really is a question of taking it season by season because the club has struggled with stability and we want to provide that and build on it.”

Guy, who lives in Wokingham, eventually wants to see his side back into the Hellenic League but admits that this will be some way off.

In the meantime he will instead be focusing on improving Henley’s performances on the pitch.

“I would like to eventually get back into the Hellenic league but that will be quite a few years off yet,” Guy said. “I like my teams to be disciplined and hard to beat and on this we lay the foundations for some nice attacking and positive football.

“I have coached from the youngest age group all the way through to men's football at all different levels. This has certainly helped me hone my coaching, my philosophy and my approach to developing young players and ultimately, getting them ready for men's football.”

Guy went into coaching at a young age after a series of injuries cut short his semi-professional playing career and his passion grew for leading teams.

He said: “Unfortunately, injuries cut my playing career short and when I was out injured, I was proactive and started my coaching badges as well as coaching a local youth team, that's where it all started.

“In terms of successes, my time at Eastleigh Football Club was a real highlight in my coaching career in regard of success both through individual player improvements and winning titles.

“Leading an under-17s side in the National League Alliance under-19s league and winning the title for the first time in the club's history was a special moment for me.

“I also had prior success within these leagues helping Brockenhurst College –Bashley FC – do the same a few years before.”

He added: “I have overseen numerous individual players make their first team debuts and sign professional contracts at Eastleigh and higher. This is what all the hard work is all about, as much as I do enjoy helping teams to become successful."

Guy hopes to turn Henley into a hub for football in the community.

He said: “We want to try and keep all our local players and try and create a club that is a hub for players in the Henley area and if the current players stay that will be a great start.

“The more senior players will be able to help the younger ones, it is not about bringing in younger ones to replace them – it is about supplementing the squad until opportunities become available.”

The players have been back in training but only in small groups due to Government guidelines to halt the spread of covid-19.

Guy explained: “As well as training, I’ve been talking to players at the college and also the senior players already at Henley to see if they will stay on.

“As soon as restrictions are eased it will be about getting everyone training together on the pitch, which should be ready in the next week, and hopefully we will soon be in a position to organise some friendlies ahead of the new season.”