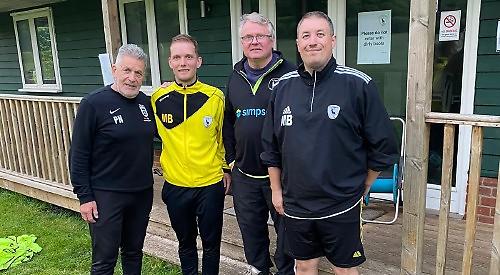 HAMBLEDEN FC have brought in a number of new faces as they look to improve on their performance from last season.

Coach Mark Butler had hoped for promotion at the start of the last campaign but were around mid-table when the season was voided due to the coronavirus pandemic.

Paul Trimmings, who coached Henley Town’s first team last season, has joined the club and a group of about 20 players have decided to follow him.

The influx of new players will allow Hambleden to have two Saturday teams. One will play in Division 3 of the Thames Valley League and another in Division 1 of the East Berkshire league.

Butler, who lives in Marlow, spent time coaching the development players at Henley last season and was impressed with what he saw in Trimmings.

He said: “We had a bit of a patchy season and that is why it has been so good to bring in Paul. I had hoped to get promoted and we only missed out on promotion by three points the season before.

“It was disappointing, because I thought we would push on. A lot of players kept letting us down every week and we were always struggling to get a team out each week.

“Since the Government said you were allowed to train in small groups of six, we have been doing that. We have already started to merge the players together and we know bonding in training is different from bonding on the pitch.

“Paul’s players were on a really good run last season before everything was cancelled. If they’d won their games in hand, they would have gone joint-second in their division and they were in two cup semi-finals.

“If he brings some of them with him and we add in the best of our players, I would hope we would have a really good chance.”

Butler and Trimmings have yet to decide who will manage which side.

Trimmings said: “Back in the day, when I was playing football, Hambleden were the top team in the area.

“We should have two very strong sides by combining the existing players and those have come over from Henley.

“They have a nice pitch and have spent a lot of money on their changing rooms. They very rarely have games called off either. I think I am pretty fair with the players and I have done it for a number of years.”

Peter North, who was also at Henley Town, will be overseeing training and development.

North, who lives in Sonning Common, joined Henley Town at the start of the year and was in charge of coaching and development, as well as being head coach.

Butler said: “The players took an instant liking to Peter at Henley. He makes training fun and they really warmed to him. He is also very experienced.

“Paul has a bunch of players that he has been with for a few years and the players had a choice to stay at Henley or come to us. I think the bulk of them decided to come with Paul and that says all it needs to say.”

In addition, Butler’s father, who is also called Mark, has recently been appointed as director of football.

The club is spending £2,000 to improve the pitch at The Dene, which was raised through a grant from the Football Association and a fundraising match last summer, when Hambleden hosted a Tottenham Legends side.